Instead of allowing grains to rot, distribute it to poor: SC to Centre 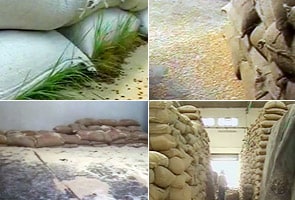 New Delhi: The Supreme Court on Thursday directed the Centre to ensure free distribution of food grains to the hungry poor of the country instead of allowing it to rot in the Food Corporation of India (FCI) godowns.

"Give it to the hungry poor instead of it (grains) going down the drain," a bench of Justices Dalveer Bhandari and Deepak Verma said in an order.

The bench further asked the Centre to ensure construction of a big godown in each of the states besides separate godowns in different districts and divisions within the states.

The apex court also asked the government to ensure that fair price shops are kept open throughout the month.

The bench passed the direction while dealing with a PIL on the rampant corruption in public distribution system (PDS) besides rotting of food grains in FCI godowns even though thousands are going without food in the country.

At the last hearing, the apex court had asked the government to consider the suggestions for disbanding PDS supply to Above Poverty Line (APL) families and restrict the benefit only to BPL families and Antodya Anna Yojana (AAY) Scheme beneficiaries.

Promoted
Listen to the latest songs, only on JioSaavn.com
However, the Centre in an affidavit on Thursday said that it was extending the PDS supply to APL families only after meeting the requirements of the BPL/ AAY beneficiaries.