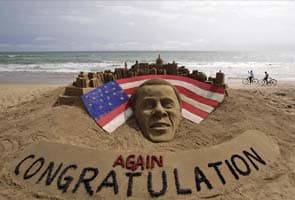 Mr Patnaik used about eight tonne of sand and also some coloured sand on the sculpture which bore the message 'Again Congratulation' and the US national flag.

"I congratulate Mr. Obama once again through my sand sculpture," Mr Patnaik said, adding he would send a photograph of his creation to the US president.

During the campaign, Sudarsan, a fan of Mr Obama, had created a sand sculpture titled 'Race for White House' at Kolkata.

Mr Patnaik has participated in more than 50 International sand sculpture championships and festivals around the world and won many prizes.