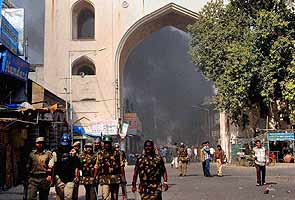 Hyderabad: The situation in the old city of Hyderabad, which witnessed violence on Friday, is peaceful, said police.

Restrictions were lifted on the movement of people and vehicular traffic around Charminar, where a mob indulged in stone pelting and arson after Friday prayers at the historic Mecca Masjid.

Ten people including five policemen were injured in stone pelting by mob and baton charge and firing of teargas shells by the police. The mob also set afire several vehicles.

Following the violence, the police had sealed all routes around the historic monument, leading to a curfew-like situation in the communally sensitive area.

This morning, the cops removed barricades on roads leading to Charminar, providing relief to people reeling under restrictions for last few days due to tension over a temple abutting Charminar. Police also announced that shops can re-open in the area.

However, prohibitory orders banning assembly of five or more people would continue in areas falling under seven police station limits.

The police commissioner said 40 people were arrested in connection with Friday's violence.

Member of Parliament from Hyderabad and Majlis-e-Ittehadul Muslimeen (MIM), however, alleged that police arrested several innocent youth and demanded their immediate release.

The old city had been simmering for the last two weeks over the alleged expansion of Bhagyalakshmi Temple, abutting Charminar.

The high court November 5 had ordered status quo, but the government allowed the temple committee to erect a canopy over the structure, which led to strong protest and withdrawal of support by MIM to the Congress government.

Promoted
Listen to the latest songs, only on JioSaavn.com
The government, however, maintained that the canopy was allowed to be erected to maintain status quo as on October 30.