Guinness Record For Largest Amount Of Kichdi Ever In Himachal Pradesh 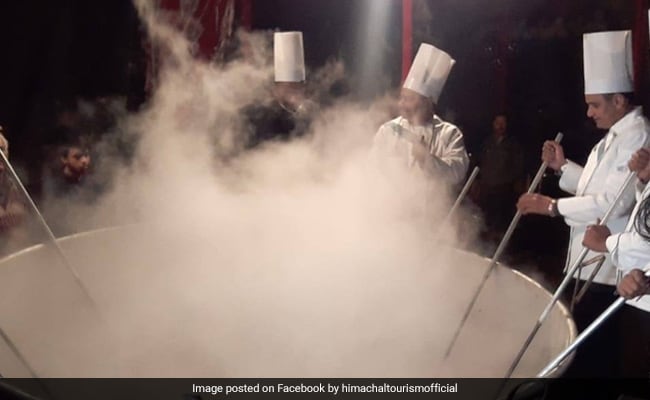 Himachal Pradesh has made it to the Guiness Book of World Records for preparing the largest quantity of khichdi on the occasion of Makar Sankranti on Tuesday.

A team of 25 chefs cooked 1995 kg of Khichdi, that had to be tilted out of its enormous container with  the help of a crane in order to be served to devotees at Tattapani in Mandi district

The Khichdi was coocked in a vessel weighing 270 kg, with the dimensions of four feet depth and seven feet diameter, said the state's tourism director Yunus Khan.

The chefs' team from Holiday Home hotel in Shimla took five hours- from 4 AM to 9 AM- to prepare the stew, said deputy general manager of the hotel Nand Lal Sharma.

Chief Minister Jai Ram Thakur accepted the certificate on behalf of the state's Tourism and Civil Aviation department from Guiness World Records for preparing the largest-ever "bean and rice" dish.

Earlier, the record for making the largest amount of khichdi- 918.8 kg - was held by celebrity chef Sanjeev Kapoor after he had represented the Indian ministry of food processing industries at an event in New Delhi on November 4, 2017, said Rishi Nath, an adjudicator of the Guiness World Records.

As the khichdi container was too heavy to be carried even by many people, a crane brought it at Tattapani from Jagadhari.

The Chief Minister said the world record at Tattapani would further develop the place as a tourism hotspot.

Kimmi Sood, a Shimla councillor, told PTI the annual tradition of serving khichdi to devotees at Tattapani was started by her relatives in 1926 and has been going on ever since. Now, this tradition is being carried out under the aegis of Durga Devi Bihari Lal Virochan Lal Trust, she said.