Celebration In Abhinandan Varthaman's School As He Returns Safely

As Wing Commander Abhinandan Varthaman became the toast of the nation overnight, KV-NAL in Bengaluru basked in the glory of having the most valorous student, for whose safety the entire country prayed in unison.

While everyone in the school heaved a sigh of relief with the news about Abhinandan Varthaman's safe return, his alma mater Kendriya Vidyalaya (NAL) proudly displayed his picture just at the entrance of the school.

"BRAVO! Wg Cdr Abhinandan Varthaman IAF (KV NAL Alumni 1998-1999) We, the family of KV-NAL, Bangalore sincerely salute you and pray for your safe return to the motherland. JaiHind," read the poster with his picture.

As the news poured in about the Indian pilot Abhinandan Varthaman being captured in Pakistan, MS Anand Shankar rang up his mother Durga Shivakumar from the USA to tell her that the pilot his junior in the school. 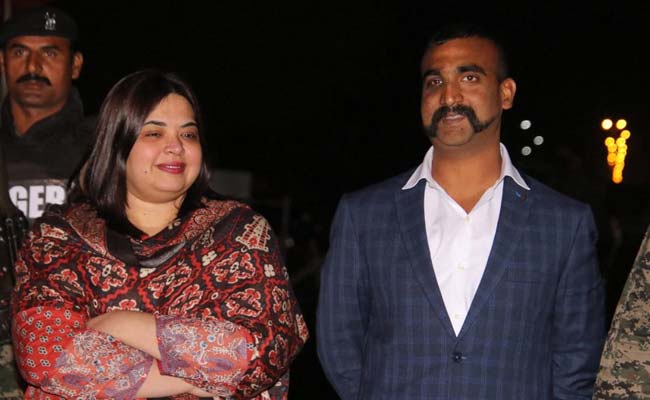 A teacher herself in the school, Durga Shivakumar started recollecting who the boy was and then her son told her that Abhinandan  Varthaman's wife Tanvi was KV-NAL's alumni.

"This description made it easy for me to recall both Abhinandan and Tanvi. I did not teach him, but I know him as a stout chubby boy, who very actively participated in sports and extra-curricular activities. He was the leader of one of the five ''houses''," Durga Shivakumar told PTI.

The Kendriya Vidyalayas have a tradition of dividing the entire school, including teachers, into four or five houses where competitions take place amongst them.

Abhinandan Varthaman had joined KV-NAL in the 11th standard. Prior to it, he was in KV-DRDO.

Within a year of his joining, he left such a deep imprint on his teachers that they made him the leader of the house.

"At that time only he became the leader of the house. He had such capabilities," recalled Manoharan Pillai, the principal of the school.

Mr Pillai said he was not a staff in the KV NAL then, but whatever account people narrated about Abhinandan Varthaman gave him goosebumps and he turned emotional.

"I could not stop my tears from flowing as I learnt that the school which I am heading today had groomed the brave IAF pilot," said Mr Pillai.

Suddenly, the entire school got into scrambling through the records to dig out old photographs of their brave alumni and chanced upon quite a few of them.

The school conducted a special prayer Friday morning for the safety and well being of Abhinandan Varthaman.

"Our joy knew no bounds when Abhinandan returned to India safely. Once he overcomes the trauma he underwent, we will invite him to "his school," said Pillai.

On Thursday, Pakistan Prime Minister Imran Khan had told a special joint sitting of Parliament that his government was releasing the pilot as a "peace gesture".

Abhinandan Varthaman returned home to a hero's welcome Friday night from his nearly three-day captivity in Pakistan, a major step towards defusing a near-war situation triggered by India's retaliation over Pakistan''s continued support for terrorism.

Abhinandan Varthaman was captured on February 27 by Pakistan following a dogfight between the two air forces in which his MIG-21 was shot down.