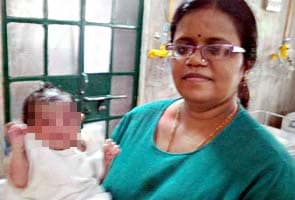 Jodhpur: In the nursery for new-borns at Jodhpur's Umaid Hospital lies a baby girl who is seven days old. Her biological mother, who is in the women's general ward does not see her, or feed her. She remains un-named. She was born a healthy baby. Her shortcoming is that she is not a boy.

When Poonam Kanwar delivered her child at Jodhpur's Umaid Hospital, mid-wives reportedly eager for a tip said, she had given birth to a son. They brought her a baby boy to hold in her arms, and collected their reward. Then the news was broken two hours later to Poonam and her family that the boy they had embraced was actually born to another woman in the same hospital. Now, Poonam says she wants a DNA test to confirm who the baby boy belongs to. That could take four weeks, say authorities. On the basis of a blood test, hospital authorities claim Poonam is the baby girl's mother.

Poonam already has a son. Like Reshma Devi, the boy's biological mother, she comes from a rather modest family of farmers in Barmer district. Reshma Devi has already left the hospital with her son and is taking full care of him.

"It's the fault of the hospital staff which has caused all this confusion," says Poonam Devi's husband, Chain Singh.

Doctors say that they cannot allow the abandoned girl to be fed by Poonam Devi till she accepts this is her child - the family says they will not allow this till they get the results of the DNA test.

Given the insensitivity and negligence of hospital staff, the Rajasthan Women's Commission has intervened.  "This case smacks of a feudal mindset that discriminates against the girl child. Also it's the negligence of the hospital staff that has created this confusion and caused so much suffering to this little girl. Our Commission is entitled to issue notices in such cases to seek action against the guilty and we shall definitely do the same''," said Dr Lad Kumari Jain, Chairperson, Rajasthan Women's Commission.
Comments
Jodhpur baby girlBaby girl abandonedUmaid HospitalBaby abandoned