Chennai water crisis: "Based on slots available for movement of these trains the capacity could go up," said a railway official

Two trains will carry at least 7.5 million litres of water every day to parched Chennai

The first 50-wagon train carrying water to Chennai arrived at the parched city this afternoon from Jolarpet railway station carrying 2.5 million litres of water. A second train will also carry more water to the city. The Chennai Metro Water has set a target of ferrying 10 million litres a day.

"Based on slots available for movement of these trains the capacity could go up," said a railway official.

Southern Railways will charge Chennai Metro Water Rs 7.5 lakh for each trip. The Tamil Nadu government has allotted Rs 65 crore for this project.

Officials say the trains took around five hours to reach Chennai's Villivakkam, 220 km away, from where water is being pumped to the Kilpauk Water Works, the pumping station that distributes water to localities in the city. 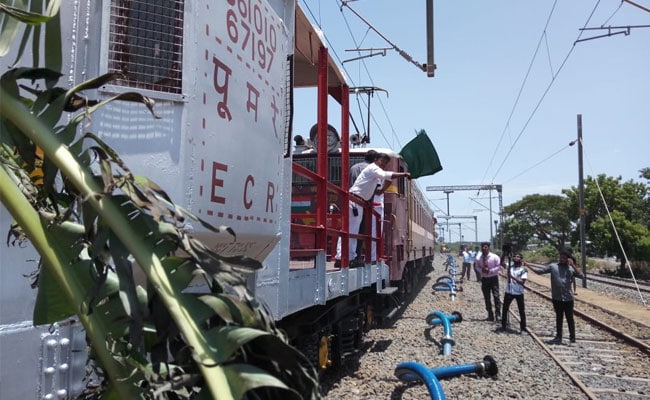 Around 100 pipes installed near the railway tracks would be used to supply 2.5 million litres of water from all the wagons to a treatment plant, said an official of Chennai Metropolitan Water Supply and Sewerage Board, news agency PTI reported.

"After treatment it would be sent for distribution. This arrangement has been made for the next six months until the (advent of the) north-east monsoon," PTI quoted the official as saying.

Blaming four parched drinking water reservoirs outside Chennai due to inadequate monsoon last year, Chennai Metro Water has cut piped water supply by 40 per cent. In many areas, residents don't get piped water at all.

Chennai is one of the 21 Indian cities that the government think tank NITI Aayog has said would run out of water by 2021.