A man repairs the roof of a house that was ripped off by Cyclone Vardah. (PTI)

Chennai: A day after Cyclone Vardah - which killed 18 people and forced the authorities to evacuate thousands -- stormed through Chennai, the city worked hard to get life back to normal. Schools and colleges remained shut, but people moved on - making their way through thousands of fallen trees.

In the city, the trees were the most visible fallout of Cyclone Vardah. Nearly 3,300 of them were uprooted all over Chennai, their fallen branches blocking roads.

Radhakrishnan Salai leading to Marina Beach was just one road which saw dozens of fallen trees.

It was one of the first issues that had to be tackled. 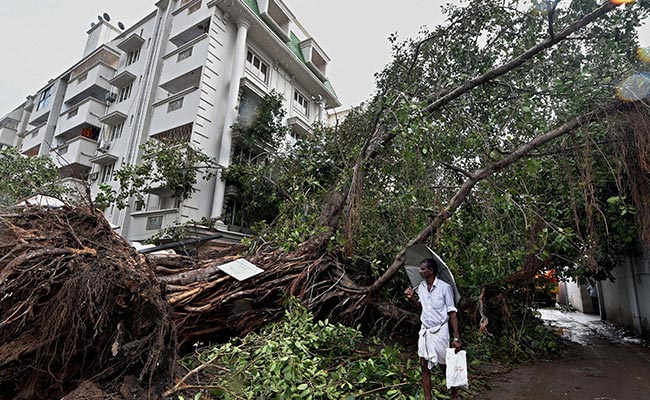 The road clearing work had started early in the morning. By evening, all the main roads were cleared. But it will take a few days to remove the fallen trees from the bylanes and residential areas, the authorities said.

Power and connectivity took a major hit for over 24 hours. While in some areas, trees had fallen on power lines, elsewhere, the authorities had cut off power from Monday evening as a precautionary measure.

At one restaurant, the NDTV crew saw signs saying cards would not be accepted because of network issues. "It is very difficult," the woman manager said. "No power or network since Monday. If we ask for cash, people give us Rs. 2000 notes and we don't have change..."

Promoted
Listen to the latest songs, only on JioSaavn.com
But despite the difficulties, the city had moved on.  Crowds were back at the memorial for late Chief Minister J Jayalalithaa whose recent death had spread gloom across the state. A group of 250 people had come by bus to the memorial from Tirpur and were seen shaving their heads as a sign of grief.

Greatly weakened, the Cyclone Vardah has now reached Karnataka in the form of a deep depression, bringing heavy rains to the state.