Chennai Roads Riddled With Potholes After 4 Days of Heavy Rain 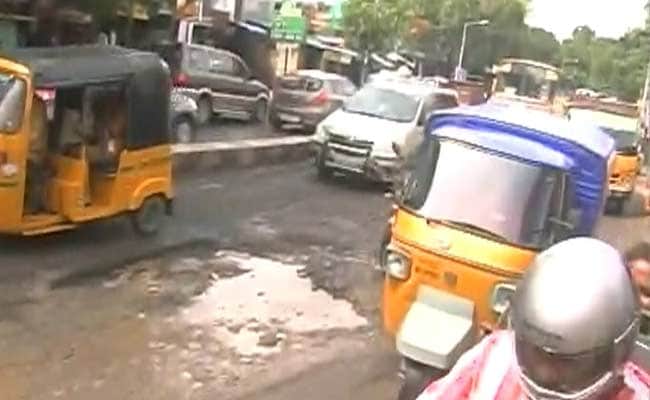 Chennai: After just four days of heavy rain, the bulk of interior roads in Chennai are battered and dotted with potholes. Arterial roads, which are used by VIPs, however, are in good shape.

For commuters, the stretch connecting Saidapet and the IT Corridor, has become a nightmare. The road was laid just two months ago for the Global Investors Meet. Traffic slows to a crawl as vehicles have to negotiate numerous potholes.

"It took more than an hour for me by bike to cross this stretch yesterday. This road was laid just recently. It is not able to bear even one spell of rain," said Vasu, an IT professional.

Mani, an entrepreneur who commutes on the stretch in his car, says, "When VIP politicians travel, they've to think about the common man as well".

Many say the politically strong road contractors are often not held accountable for the poor quality of roads they lay. Experts also blame it on lack of scientifically designed storm water drains. In most areas, storm water drains don't work, leading to severe water logging even after moderate rain.

Mark Selvaraj, Director, LANDTECH explains, "When there's so much of water and heavy vehicles run over the roads the bitumen that binds everything together would just let loose."

Chennai Mayor Saidai Samiyappan Duraisamy and senior officials refrained from speaking on record. However, authorities say like the arterial bus roads, the quality of other interior roads too will be improved. They claim around 2000 pot holes have been fixed on 471 routes. Commuters on the ground, however, say "not really".