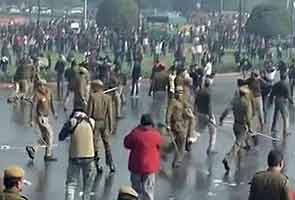 New Delhi: Protests near Rashtrapati Bhavan on Saturday against the gang-rape of 23-year-old medical student Amanat (NOT her real name) intensified in the evening, with the demonstrators throwing stones at the police, damaging the windows of a bus, breaking barricades and attempting to move towards Parliament. The police lathicharged the protesters, injuring one person. Some policemen were seen hurling stones back at the protesters.