Mumbai Needs The Metro, But Can We Save Aarey's Trees Too, Please?

Today, the debate neither helps those who are fighting to save the trees at Aarey, nor those who are committed to delivering the Metro to the city on time at any cost.

As a reporter, I have been covering the Aarey protests for a while now and the question has remained - whether the Metro car shed should come up at Aarey Colony, an area lush with trees and grassland, one that is technically not forest land but might well be.

Today, the debate has degenerated into an ugly row that doesn't help anyone. It neither helps those who are fighting to save the trees at Aarey, nor those who are committed to delivering the Metro to the city on time at any cost.

Those who are against the car shed coming up at Aarey colony are being portrayed as Enemies of Development (even enemies of the state) who want Mumbaikars to continue suffering harrowing commutes. 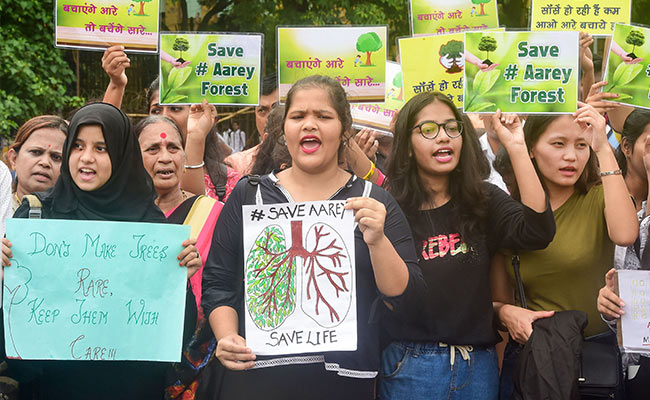 Residents protest against the cutting of trees in Aarey forest to make the car shed for Metro project in Mumbai.

The government's stand has been articulated by Ashwini Bhide, the IAS officer helming the part of the project that has become most controversial. The BJP-Shiv Sena government seems to have delivered in terms of upgrading Mumbai's infrastructure, at least in public perception. The Metro should have been constructed in Mumbai two decades ago.

It's much-delayed but finally, the city is getting a public transport system befitting the country's financial capital. The government has prioritized upgrading Mumbai's commute capacity and quality and all across the city, there is construction at breakneck speed.

While Ms Bhide has been praised for the speed and efficiency of the project, she has drawn flak for her stance on the car shed, which she firmly says cannot be moved to any other location.

As she doubles down, especially on social media, along with a campaign by the Metro, the city is, unfortunately, split down the middle.

Celebrities like Amitabh Bachchan and Akshay Kumar have spoken in favour of completing the Metro project as soon as possible while several others like Shraddha Kapoor, Raveena Tandon, Randeep Hooda, Alia Bhatt and singer Shaan have fiercely opposed the cutting of trees. 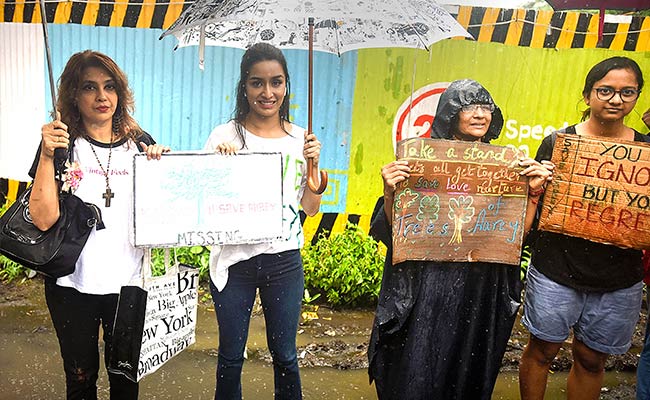 Bollywood actor Shraddha Kapoor with local citizens protests against the cutting of trees in Aarey Forest for the Metro-3 car shed in Mumbai.

The Mumbai Metro body MMRCL is constructing the part of the project that is underground, crisscrossing some of the most congested areas of the city through twin tunnels 25 metres below the ground. The planned car shed for this line of the Metro falls within the Aarey Colony, which is what environmentalists, conservationists and citizens' groups are objecting to.

The site where the car shed is coming up is in an area where the Mithi river swells before it finds its course through some of the busiest parts of the city. This area has rich bio-diversity and is home to some rare species and leopards. Conservationists fear all this will be lost if the car shed comes up.

There is also a worry that with a loss of this space, the Mithi will be more prone to flooding.

The Metro is an extremely important project to Mumbai. It is expected to reduce congestion on local trains and take some pressure off the peak time horror called the Western Express Highway.

Mumbaikars can finally hope for decent commute, which they should really have had years ago. It is absolutely imperative that the Metro is built as soon as possible but will it be fair to do it at the cost of a thriving ecology and bio-diversity?

If you ask the average Mumbaikar to choose between the Metro and 2700-odd trees at the Aarey Colony, they are most likely to choose the first.

For too long, Mumbaikars have braved "super dense crush load" a term coined purely for the purpose of describing the crowd that boards suburban trains during rush hour. Losing life or limb is a possibility that commuters face every day when they get to work.

Yet there are some among them who will brave a downpour to stand and protest outside the Metro office. Each voice is important.

Yet, if there is any chance of saving Aarey's trees, we could all explore it, for the sake of this wonderful city. It's not unfair to demand Chief Minister Devendra Fadnavis' attention. If he has delivered on issues that are far more challenging, he should try and save the trees too. Not only will he have the blessings of millions of Mumbaikars, he will also have the blessings of nearly 3,000 trees. Imagine the amount of goodwill.

Shiv Sena's Aditya Thackeray has been consistently opposed to the cutting of trees at Aarey for the Metro car shed while the Aam Aadmi Party (AAP) is focused on attacking him and even held a press conference on his alleged 'double speak' on the subject.

Earlier, AAP had filed a petition in the Bombay High Court challenging the tree authority's procedure of deciding on what part of the city to use for constructions. The party is planning to file another petition after citizens have gone to court against the manner in which the permission for the Metro plan was finally granted.

The Congress's Jairam Ramesh also visited Aarey colony and more parties seem to be taking a stand. NCP's Supriya Sule visited Aarey after her party's representative voted in favour of cutting the trees at a meeting. Raj Thackeray's wife Sharmila Thackeray has joined the voices of protest against the cutting of trees. 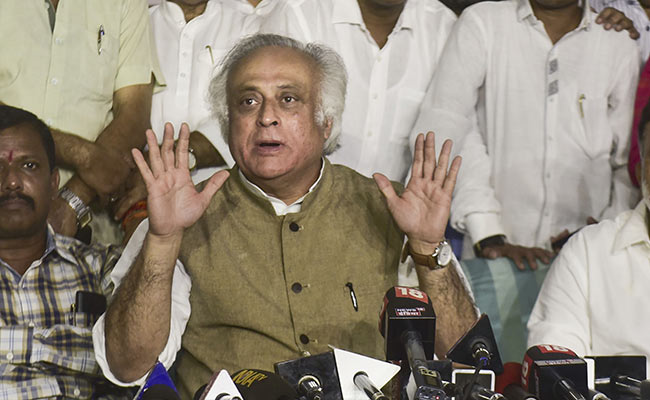 Senior Congress leader Jairam Ramesh addresses the media during his meet with activists, opposing chopping of trees in the area for the metro car shed project on his visit to Aarey forest area in Mumbai.

A massive transport project can be a huge challenge for any city. The challenge for Mumbai, specifically, is the sheer crowds and traffic on a daily basis. Traveling on the Western Express Highway during office hours could mean an extra three hours on the road. There is a running joke amongst bus conductors who operate Mumbai-Surat buses: "Four hours to leave Mumbai and then four hours to reach Surat."

That needs to change.

Then again, should it happen at the cost of so many trees?

Especially at a time the country has launched a massive tree planting programme under the leadership of Prime Minister Narendra Modi to improve our carbon footprint.

Mumbai's infrastructure projects often land up in courts leading to frustrating delays. The Metro and the Coastal Road have also reached the courts. Let us hope these issues are resolved soon. Let us hope we have our Colaba-Bandra-SEEPZ metro soon.

Mostly, let us hope we can save both Mumbaikars and Aarey's trees.