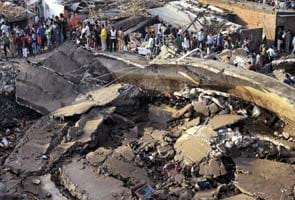 Bhopal: Seven people were killed and over 40 others injured when an overhead water tank collapsed in JJ Colony in Bhopal's Saibaba Nagar slum area late on Sunday.

The overhead water tank of Bhopal Municipal Corporation (BMC) collapsed at Saibaba Nagar at around 1 am, killing seven people and trapping a large number of others, Bhopal Collector Nikunj Shrivastava told PTI.

A number of slums situated in the vicinity of the tank also got damaged in the incident, he said.

The cause behind the sudden collapse of the water tank was yet to be ascertained.

Madhya Pradesh Chief Minister Shivraj Singh Chouhan has announced an ex-gratia of Rs one lakh each to the kin of those killed in the incident and directed the officials to provide free of cost treatment to the injured.

Besides, Rs 25,000 each would be provided to the seriously injured people and Rs 10,000 each to those who suffered minor injuries.

The Chief Minister also directed to provide Rs 50,000 each to the slum dwellers whose houses suffered major damages and Rs 20,000 each for the partially damaged ones, the Collector said.

Senior administrative and police officials were camping in the area to supervise the rescue operation, which continued till late Monday morning.

The water tank was over 20 years old and now the administration has ordered for a probe to know the cause of the collapse.