Bhopal: Early in its brand-new term, an engineering class in Bhopal is unfolding to the rapt attention of two students. They are among only seven subscribers to the country's first engineering course to be taught entirely in Hindi.

That's a plus, not a problem, says Bansidhar Singh, after the lecture is completed. "Because we are just two students, we get the full attention of our professors," said the 18-year-old, who has moved from Uttar Pradesh to the university named after the BJP's iconic leader, Atal Bihari Vajpayee.

The five-year-old university has offered liberal arts courses in Hindi since it was set up. But as of this September, it has organized mechanical, civil and electrical engineering courses for upto 90 students. Though less than 10% of the 90 available spots have been taken, officials believe the numbers will grow as the engineering department establishes itself.

"I don't think I will face problem in getting a job," says Bansidhar Singh, who is 18, responding to criticism that students who graduate with Hindi engineering degrees will find it hard to compete in an overcrowded job market with others who are fluent in English. 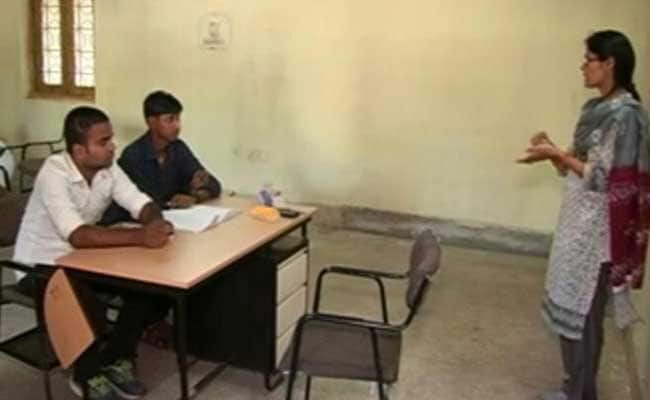 The five-year-old university has offered liberal arts courses in Hindi since it was set up.

The BJP has been in power for over a decade in Madhya Pradesh. The Atal Bihari Vajpayee Hindi Vishwavidyalaya is funded with five crores every year from the state government. For the engineering department, the institution wants an additional four crores annually for setting up specialized laboratories and other facilities. There are other challenges too - professors teaching engineering have been arranged on a temporary basis because there just aren't enough candidates with the required proficiency in Hindi; there is also a shortage of teaching material and textbooks that use Hindi to explain engineering.

Promoted
Listen to the latest songs, only on JioSaavn.com
"Initially, for me, the numbers are not important. I would have started the course even if I had got one student. Does everybody doing engineering in English get a job?" asked Vice Chancellor Mohanlal Chheepa.

Coming soon, he says, a degree in medicine taught and studied only in Hindi.