The patient, a power distribution company employee, was admitted to hospital two weeks ago with a kidney condition.

The man had been unwell since January and he was admitted to People's hospital on June 23.

A coronavirus patient's body was left on the pavement outside a hospital in Bhopal on Monday night after a tragic to-and-fro between hospitals. Security footage accessed by NDTV shows two ambulance workers in PPE suits taking the body out in a stretcher, leaving the patient on the pavement and driving off with the stretcher.

A magistrate has been asked to inquire into the case involving a power distribution company employee who was admitted to hospital two weeks ago with a kidney condition. In the last few days, he had developed breathing trouble and was suspected to have pneumonia. He tested positive for COVID-19 on Monday evening.

The man was being treated at the People's Hospital in Bhopal but after his COVID-19 test, he was to be moved to Chirayu hospital, Bhopal's nodal centre for the virus.

His son told NDTV that his samples were collected on Sunday and his report returned positive on Monday.

He had been unwell since January and he was admitted to People's hospital on June 23.

The patient's son insists he was alive on Monday morning when an ambulance picked him up to be taken from People's hospital to Chirayu Medical College. He questioned why the ambulance returned.

"I do not know what happened in the ambulance but why did the district administration have to shift him to Chirayu and send the ambulance if they were to dump him on the road like this? Both the hospitals are at fault...they never informed us," the young man told NDTV.

People's hospital manager Uday Shankar Dixit said: "As per protocol and IDSP (Integrated Disease Surveillance Programme) instructions, an ambulance from Chirayu Medical College reached, but after an hour-40 minutes they informed us that they were coming back. But by then we had sealed the ICU and started the process of fumigation of the hospital as per protocol, and while the process was still on, the ambulance returned."

Waiting with the body, the ambulance staff apparently asked for a stretcher from the hospital but did not get one. "But when we resisted they dumped his body on the road outside the hospital. So after that I requested our staffers to wear a PPE kit, used our stretcher and tried to revive him but he was not breathing," Mr Dixit said. 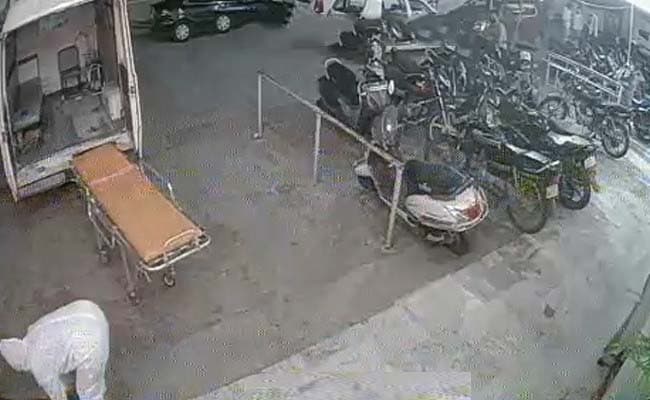 The man was being treated at the People's Hospital in Bhopal

Ajay Goenka, Director of Chirayu Hospital, said doctors from People's hospital had called and asked for an ambulance, stating they had a patient whose kidneys had failed, who had a dialysis and was also suffering from some heart diseases, but "he is stable".

"So we decided to send one ambulance with oxygen support. The driver picked up the patient and when he reached near VIP road he felt his condition is deteriorating and he is critical. He realized because of the traffic it will take around 45 minutes to reach Chirayu Hospital, so after talking to the doctors at People's hospital, he turned back midway," Mr Goenka said.

"A CPR and other interventions were conducted by People's Hospital. Our ventilator-equipped ambulance reached after 20-25 minutes but by the time he had collapsed. We took him to our mortuary, there was no lapse I don't why authorities from People's hospital creating a fuss about the driver coming back," he remarked.

Bhopal Collector Avinash Lavania has sought an explanation from People's hospital. "How can you refer a patient to another hospital without stabilizing his condition? Moreover, he was admitted there since 23rd, so what protocol did they follow to ensure he doesn't get Corona infected? How can somebody who is admitted to a hospital for more than a week suddenly become corona positive? His symptoms would have shown if his situation became so bad," the officer told NDTV.