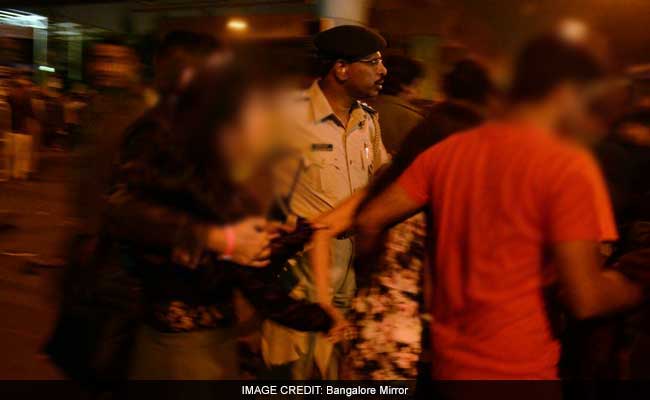 The minister, who is responsible for policing, said in an interview to Times Now yesterday that "western culture" is to blame and that "these things do happen," further outraging Bengaluru as well as the rest of the country.

Describing the street party where thousands gathered to countdown to 2017, the minister, who is from the ruling Congress, said, "A large number of youngsters gathered -- youngsters who are almost like westerners... they try to copy westerners not only in mindset, but even the dressing, so some disturbance, some girls are harassed, these kind of things do happen."

The Bengaluru Police late on Tuesday, two days after the incident, said they have filed a case after finding credible evidence of molestation.

Lalitha Kumaramangalam, who heads the National Commission for Women, said the minister is obliged to resign over his comments. "I want to ask this minister: are Indian men so pathetic and weak that when they see a woman in western clothes on a day of revelry, they get out of control?" she asked.

The minister offered no apology for the police's failure to protect the women, and said footage from security cameras is being trawled to identify those who sexually harassed and molested women. On New Year's Eve, there were 1,500 cops patrolling the city. Those at the city's famous MG Road were unable to cope with the huge crowd that had gathered there. And then men, some of them drunk, went berserk.

Union Home Minister Kiren Rijiju tweeted, "We can't allow such shameful act of #MassMolestation go unpunished. Bangaluru is a vibrant city & women must be safe in a civilised society."  Kiran Mazumdar Shaw, top entrepreneur who lives in Bengaluru, tweeted, "A shameful incident which I hope is an aberration n will never happen again. Police must be proactive n use CCTV footage to book hooligans."

Promoted
Listen to the latest songs, only on JioSaavn.com
A young woman who was present on the boulevard in the heart of the Karnataka capital that night described the situation as "almost a stampede" and said she saw "girls crying and shouting for help." One woman, she said, fainted, another took off her shoes to fend off attackers.

"Whenever a woman passed the molesters groped and pawed them, taking advantage of the intense crowd...You can fight back one or two people but how do you fight a crowd," she said, emphasising that men were "intentionally" targeting women. It was "mass molestation," she said.