Ramaswamy was taken to a hospital in Bengaluru by his family when he suddenly felt weak in his left hand and leg one day. 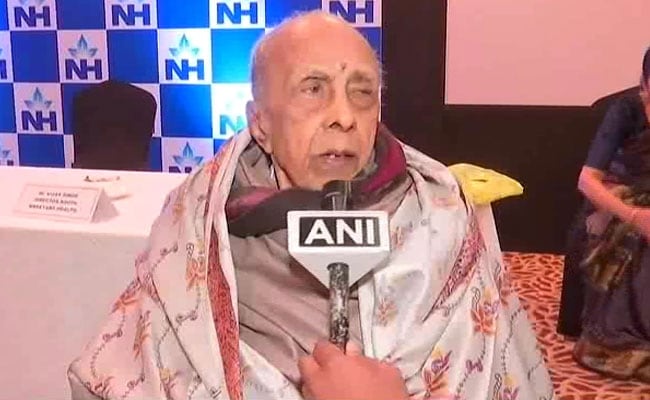 Ramaswamy was discharged from the Bengaluru hospital within three days.

Doctors at a private hospital in Bengaluru have used revolutionary treatment on a 102-year-old man, Ramaswamy, who faced the prospect of paralysis after a stroke.

Mr Ramaswamy was taken to hospital by his family when he suddenly felt weak in his left hand and leg one day. At the hospital in Whitefield, an MRI scan revealed that Mr Ramaswamy had suffered a stroke and the right side of his brain was not getting sufficient blood supply because of a block in a blood vessel.

Doctors then decided to go for thrombolysis, which involves dissolving clots in blood vessels.
"Thrombolysis is a very challenging treatment method in seniors, as with age our brain becomes fragile and strong medication like thrombolysis can lead to bleeding in the brain. In this case, the stroke survivor was 102 years and this was definitely a tough decision," said Dr Deepak N, associate consultant neurologist at Narayana Multispeciality Hospital.

Mr Ramaswamy is the oldest person the doctors know, to have been saved from a life-threatening stroke with this treatment. He was discharged within three days.

"Stroke treatment has been revolutionised, however, awareness about the condition is still in its nascent stage. If treated within the golden hours which is 4.5 hours, patients can be saved from mortality or morbidity caused due to stroke," said Dr Deepak.

Back at home, Mr Ramaswamy said, "Being paralysed at this age would have put tremendous stress on my family and I am grateful to the hospital for taking the chance and gifting me a life to cheer."

According to the World Health Organization (WHO), stroke is one of the most common neurological conditions causing long-term disability and mortality. In India, it is the second most common cause of death.