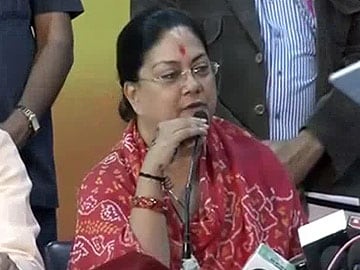 Kailash Meghwal was given the Mines Ministry and Kalicharan Saraf was alloted the Education Ministry.

The ministries retained by Raje include Finance and Home.

Yesterday, nine BJP MLAs were sworn in as Cabinet ministers while three others were given independent charge as Minister of State in the Vasundhra Raje government.

Two of the nine cabinet ministers, Kataria and Rathore have criminal charges against them.

Kataria, former Home Minister in previous term of Raje, is accused in the Sohrabuddin Sheikh fake encounter case of Gujarat in which CBI has filed a supplementary chargesheet against him early this year.

A Mumbai court has granted him an anticipatory bail.

Promoted
Listen to the latest songs, only on JioSaavn.com
Rathore was arrested and sent to jail by CBI in connection with the Dara Singh fake encounter case in which about a dozen policemen are already in jail.

A Jaipur court had discharged him in a controversial order even before charges were framed against him.