On Wednesday, huge hoardings with slogans "Acche honge paanch saal, Dilli mei to Kejriwal" (5 years will be good if Kejriwal is in Delhi) were spotted in different areas of Delhi. 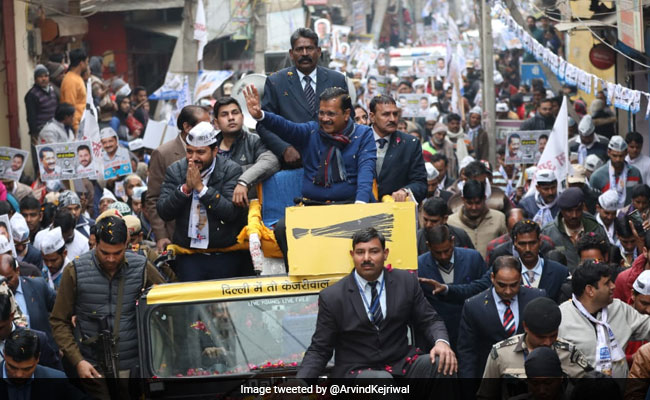 The AAP on Tuesday launched a fresh poll campaign for the Delhi elections. (File)

With Delhi inching closer to the last phase of campaigning for assembly elections, the Aam Aadmi Party (AAP), which launched a fresh campaign, has come out with new billboards and posters, depicting Chief Minister Arvind Kejriwal as the "caretaker" of the city and its people.

On Wednesday, huge hoardings with slogans "Acche honge paanch saal, Dilli mei to Kejriwal" (5 years will be good if Kejriwal is in Delhi) were spotted in different areas of Delhi.

While one of the posters depicts Mr Kejriwal addressing a gathering, another shows him helping an elderly woman. In another hparding, the chief minister is seen with the students of Delhi.

Mr Kejriwal in his speeches recently has been referring to himself as the "elder son" of the family of Delhi people.

The AAP on Tuesday launched a fresh poll campaign for the Delhi elections, with a plan to reach out to as many as 50 lakh houses in one week.

Under the new campaign, AAP leaders and volunteers will show their report card to voters and a guarantee card with promises to be fulfilled in the next five years after.

The slogan of the campaign is "Mera Vote Kaam Ko, Seedhe Kejriwal ko" (My vote to work, directly to Kejriwal).

According to the party, leaders will appeal to citizens of Delhi to vote on the basis of their work and development in the last five years.

The ruling AAP has fielded candidates on all 70 Assembly constituencies in Delhi. Mr Kejriwal has won twice in the past from New Delhi constituency.

The AAP had won a landslide victory in the last polls winning 67 of 70 seats. The counting of votes will take place on February 11.