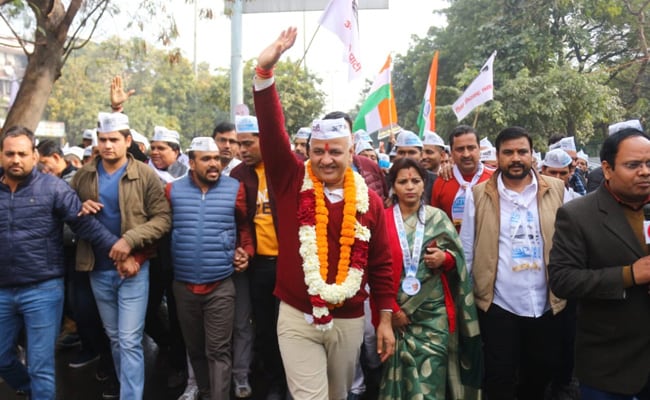 Manish Sisodia is contesting from the Patparganj assembly seat for the third time.

Mr Sisodia, also Delhi's Deputy Chief Minister and Education Minister, will file his nomination papers for the February 8 assembly polls later on Thursday. He is contesting from the Patparganj assembly seat for the third time after winning from here in 2013 and 2015.

Accompanied by scores of party workers, Mr Sisodia met people and sought their blessings and urged them to re-elect him.

Later, he will hold a bike rally before filing the nomination, as per his schedule.

Patparganj is one of the 70 assembly seats in the national capital, going to polls on February 8. The Congress and the BJP are yet to announce their candidates from here.

Mr Sisodia said he is confident that the party will win the elections. "We won in 2015 on the basis of our 49-day government in 2013. Now, after working for five years, we are confident that we will be re-elected. We need your support," said Mr Sisodia.

Nominations for the Delhi elections began on Tuesday. The last date to file nomination is January 21, the scrutiny will take place on January 22 while the last date of withdrawal of candidature is January 24.

(Except for the headline, this story has not been edited by NDTV staff and is published from a syndicated feed.)
Comments
Manish SisodiaAAPDelhi Assembly Elections 2020