"Don't Be Lazy": Priyanka Gandhi To Delhi Residents As Voters Head To Polls

All three members of the Gandhi family - Priyanka Gandhi Vadra, Sonia Gandhi and Rahul Gandhi have cast their votes - with all three x 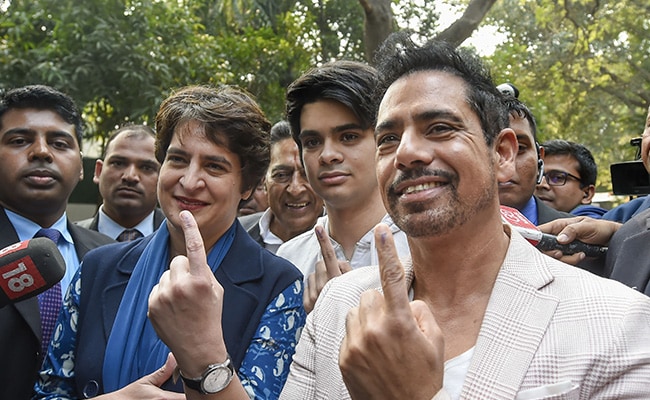 Earlier in the day she went with her mother, interim Congress chief Sonia Gandhi, while she cast her vote at Nirman Bhawan in central Delhi. At that time Ms Gandhi Vadra told reporters: "Everyone should come out and vote. It is extremely important. Don't be lazy".

Mr Kejriwal, who is seeking a third straight term from the constituency and whose AAP is looking to retain power in Delhi, has already voted as well; he did so from the Civil Lines area and was accompanied by his wife Sunita and son Pulkit.

Polling booths across Delhi opened at 8 am but the first two hours saw a poor turnout, with only 4.3 per cent reported. The figure improved to 6.3 per cent by 11 am and jumped to 15.6 per cent by 12 noon.

Today nearly 1.5 crore voters will decide between giving Chief Minister Kejriwal's AAP a second term or replacing it with the BJP.

The Congress, which ruled Delhi for 15 years before the AAP ousted it, has run a relatively lacklustre campaign and is seen by many as a distant third option, with top leaders like Ms Gandhi Vadra and Mr Gandhi barely campaigning.

The BJP has pinned its hopes of returning to power in Delhi on criticism of anti-citizenship law protesters in the Shaheen Bagh area, where voting began amid heavy security.

The AAP has responded to the BJP's attacks - including one in which Mr Kejriwal was called a "terrorist" - by pointing to improvements in Delhi schools and public healthcare and transport, among other things.

Across Delhi tight security arrangements have been put in place for Delhi Assembly Election 2020, with extra attention paid to places like Shaheen Bagh and other sensitive areas.

Arvind Kejriwal's AAP has set itself the target of winning all 70 in this election, but this appears unlikely. Election results will be declared February 11.

Arvind Kejriwal's Response After Smriti Irani Accuses Him Of Misogyny