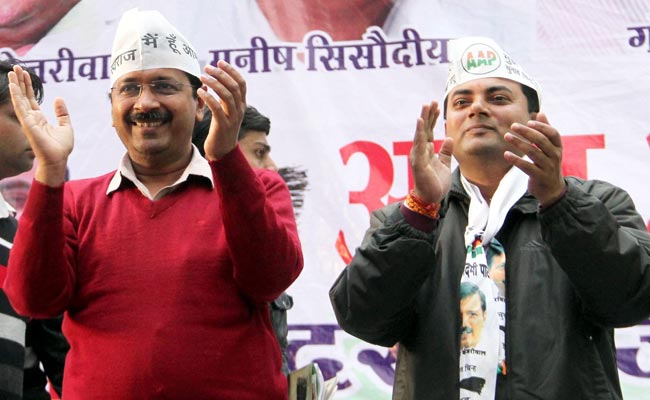 Another BJP cartoon for the Delhi elections seems to have boomeranged days after the party decided that it would focus on a "positive campaign only."

The Aam Aadmi Party has accused the BJP of targeting its chief Arvind Kejriwal's caste or 'gotra' in a cartoon-based ad that shows him threatening to disrupt the Republic Day parade one year and asking for a VIP pass for the next year's parade.

"The BJP targeted my children in their ad, but I kept quiet, didn't react... the BJP has been launching personal attacks on me through their ads, but today they referred to the entire Agarwal Samaj as 'Updravi'," Mr Kejriwal alleged today.

AAP leader Ashutosh has demanded that the BJP withdraw the ad "within two hours and apologize or we will be forced to take action, will go to the EC."

Mr Kejriwal has in his campaigns described himself as a "baniya" to appeal to the trader community, seen as a traditional BJP votebank, of which Agarwals are a prominent part.

The ruling BJP has already been struggling to address the community's misgivings over Foreign Direct Investment in retail. Mr Kejriwal positioning today's ad as an insult to the entire community will add to the BJP's jitters with the Delhi elections just five days away. 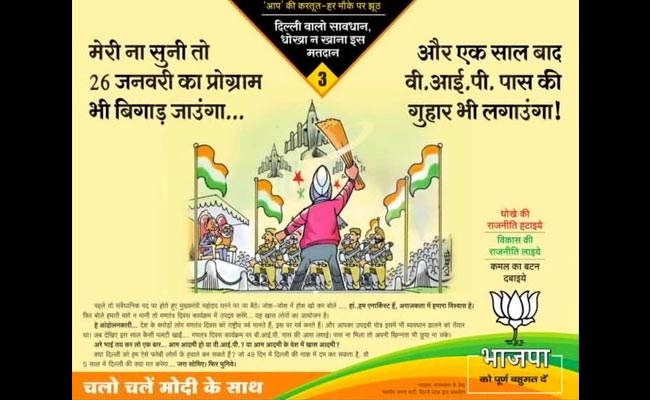 Last week, another BJP ad depicted Mr Kejriwal's children. It also showed Gandhian activist Anna Hazare in a framed photograph with a garland around it.

The AAP chief had  tweeted then, "Nathuram Godse killed Gandhiji on this day in 1948. BJP has killed Anna in its ad today. Shudn't BJP apologise?"

Promoted
Listen to the latest songs, only on JioSaavn.com
Senior BJP leader Arun Jaitley had stepped in and had the ad withdrawn. He reportedly also insisted that the BJP's new aggressive campaign for the Delhi elections must be positive.

"If the Aam Aadmi Party is born out of politics of negativism then the BJP should not do the same. We have a lot of positives. The BJP should only do positive campaigning is my advice to the party," he said to NDTV.