Srinivasamurthy Dikshutulu, the ex-chief priest who died this morning, was relieved from his duties last year, Tirumala Tirupati Devasthanam chairperson YV Subba Reddy told NDTV. The 73-year-old had served the temple for over three decades. 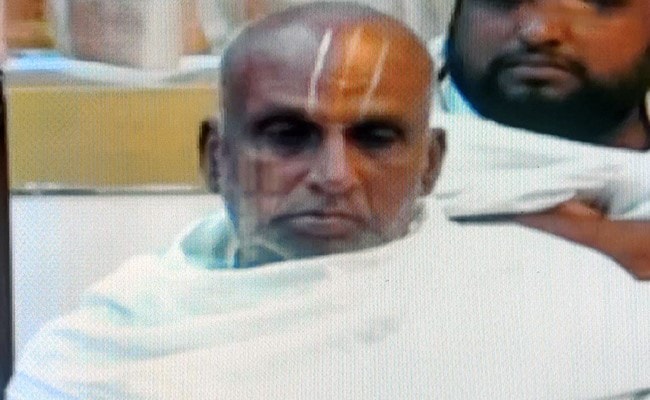 A former chief priest of the Tirumala Tirupati Balaji temple in Andhra Pradesh died this morning due to coronavirus-related complications. The temple board, however, has clarified that he was not on duty; 158 staff members, including 21 priests, at the temple have tested positive so far.

Srinivasamurthy Dikshutulu, the ex-chief priest who died this morning, was relieved from his duties last year, Tirumala Tirupati Devasthanam chairperson YV Subba Reddy told NDTV. The 73-year-old priest had served the temple for over three decades.

Mr Reddy had earlier indicated that there was no plan to close the Tiurpati temple - one of the most famous pilgrimage sites in the world - to the visitors. The temple's board decided to re-open it on June 11, in line with the centre's "Unlock" plans to handhold the country out of the pandemic in phases.

"We are monitoring the situation. The temple would remain open for now," he said.

Mr Reddy said half of the staff members, who have tested positive so far, have already recovered, adding that one of the patients is in critical care.

Temple authorities have also said they do not believe the priests would have contracted the virus from the pilgrims as social distancing is ensured at all times.

Last week, Mr Reddy said there is no evidence of pilgrims testing positive for coronavirus. "We have no plan to close Tirumala temple. Senior priests will not be put on duty. Priests and employees have requested separate accommodation," Mr Reddy said, adding a separate facility for making food for the employees will be set up.

The temple town Tirupati has largely turned into a containment zone and it is suspected the virus may have spread in the neighborhood.

Ramana Dikshutulu, who was reinstated as honorary chief priest by the YS Jaganmohan Reddy government, has demanded closure of the temple to the public citing risk to public health.

Several cases have been reported from other Tirumala Tirupati Devasthanam temples like the Kalyana Venkateswara Swamy Srinivasa Mangapuram temple where two people including the temple superintendent have tested positive. The temple has been closed for the public.

About 5 km away, three staff members at the Tiruchanur Padmavathi temple have reportedly tested positive. Some cases have also been reported from temples like Govindaraja Temple.