Dalai Lama's visit to Kumbh cancelled due to security reasons 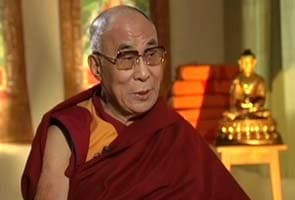 Allahabad: The proposed visit of Tibetan spiritual leader the Dalai Lama to the Maha Kumbh congregation here has been cancelled due to security reasons, a senior Vishwa Hindu Parishad leader said today.

"The Dalai Lama's three-day tour, which was to begin today, has been cancelled as the necessary security clearance could not be obtained from the Uttar Pradesh government," VHP Kashi Prant President Manoj Srivastava said.

However, senior UP government officials have refused to comment on the cancellation of Dalai Lama's visit.

Srivastava said "the Dalai Lama was expected to inaugurate a Lama Nagar, situated inside our camp, where Buddhist literature and Tibetan artefacts will be on display".

However, "The Lama Nagar will be inaugurated, in presence of our patron Ashok Singhal, by Buddhist monks who had arrived a few days earlier," he said.

"Although there is disappointment over cancellation of the spiritual leader's tour, his message of peace and brotherhood will nevertheless be disseminated at the ongoing congregation".

The visit of the Dalai Lama, who was scheduled to take part in a number of functions organized at the Kumbh by the VHP, had triggered protests from some religious leaders on the ground that Buddhists did not believe in the "sanctity of the Vedas".

Promoted
Listen to the latest songs, only on JioSaavn.com
However, the VHP has been claiming that Buddhism "like Jainism and Sikhism, is an offshoot of Vedanta philosophy" and that the Dalai Lama has been attending a number of functions organized by Hindu outfits.