Basant Panchami: Kumbh Shahi Snan in Allahabad: Security arrangements would be three-tier -- in the Kumbh mela region, in Allahabad and in the adjacent districts. 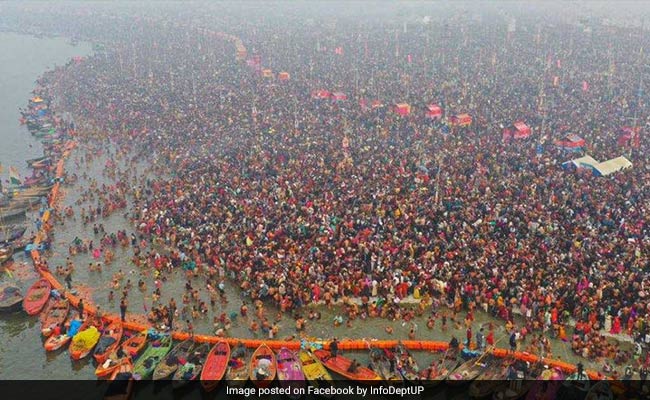 Vasant Panchami: The Uttar Pradesh police too has geared up for a seamless and incident-free Kumbh Mela

Prayagraj is all set to host the third ''shaahi snaan'' of the ongoing Kumbh on Basant Panchami during which more than two crore devotees are expected to take a holy dip.

All the roads from the neighbouring districts led to Sangam city as devotees from different parts of the state and country arrived here to participate in the bath.

Kumbh Mela Adhikari Vijay Kiran Anand told PTI Saturday that more than two crore people from different walks of life are likely to arrive here to take a dip on the occasion of Basant Panchami on Sunday.

Security personnel, including Uttar Pradesh Police and central paramilitary forces, were deployed at different crossings and parts of the city.

The Mela commenced on January 15 on Makar Sankranti, the first bathing day, and the Mahashivratri on March 4 will mark its last bathing day.

''Shahi snan'' is the central highlight of the Kumbh Mela and the most important part of the celebration. It is only after the completion of ''shahi snaan'' that people are allowed to take the holy dip, he said.

Prior to Basant Panchami, shaahi snaans were held on Makar Sankranti on January 15 and Mauni Amawasya on February 4.

Allahabad Mayor Abhilasha Gupta Nandi told PTI, "Basant Panchami is the third and the last shaahi snaan of the Kumbh. By taking three dips on this day, a devotee gets the blessings of Ganga, Yamuna and the mythical Saraswati rivers. Hence, it holds tremendous significance for devotees."

The Uttar Pradesh police too has geared up for a seamless and incident-free Kumbh, spread over 3,200 hectare land in the Sangam City.

Security arrangements would be three-tier -- in the Kumbh mela region, in Allahabad and in the adjacent districts.

"The whole region has been demarcated into nine zones and 20 sectors with the deployment of over 20,000 police personnel, 6,000 home guards, 40 police stations, 58 outposts, 40 fire stations, 80 companies of central force and 20 companies of PAC," UP's Director General of Police (DGP) OP Singh had earlier told PTI.

Besides, there would be three police lines, one traffic police line, three women police stations and 317 police response vehicles to tackle an emergency situation with a response time of less than 10 minutes, he said, adding that mounted police would also be there.