A 182-metre statue, the Statue of Unity in Gujarat's Narmada is dedicated to Sardar Vallabhbhai Patel, is the world's tallest statue, and is a major tourist attraction. 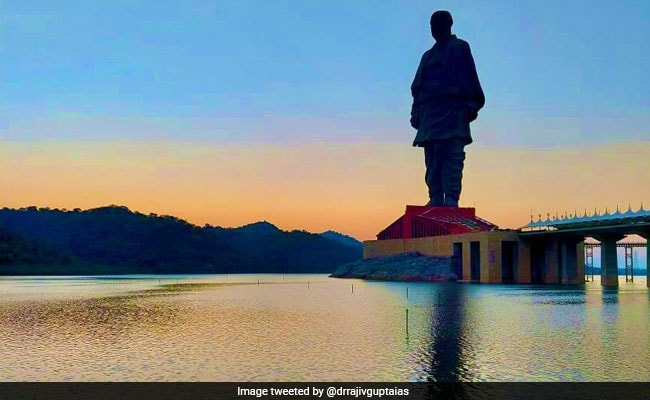 The Statue of Unity crossed the 50-lakh tourists mark in March 2021 after just 2 years of opening. (File)

The Statue of Unity at Kevadia in Gujarat's Narmada district will remain closed for visitors between October 28 and November 1 in view of the National Unity Day celebration on October 31 to mark Sardar Vallabhbhai Patel's 147th birth anniversary, officials said today.

The office of chief administrator of the Statue of Unity said in a note on its official website that the statue along with other attractions there will remain out of bounds for visitors from October 28 to November 1.

This is being done in view of the preparations that are underway for the National Unity Day or Rashtriya Ekta Diwas, to be celebrated on October 31 to mark the birth anniversary of Sardar Vallabhbhai Patel, an official said.

Prime Minister Narendra Modi is most likely to visit Kevadia on October 31 to mark the 146th birth anniversary of the Iron Man of India, though it is yet to be officially announced, he said.

In 2014, the government had to observe October 31 as National Unity Day to "provide an opportunity to re-affirm the inherent strength and resilience of our nation to withstand the actual and potential threats to the unity, integrity and security of our country."

The statue was inaugurated by PM Modi on October 31, 2018, and he has visited the site every year since then to mark Patel's birth anniversary and pay floral tributes. Since then, the site has added several more attractions for the visitors, such as theme-based gardens, jungle safari, children nutrition park, river rafting, night tourism, among others.

In March this year, the Statue of Unity crossed the 50-lakh tourists mark in just a little more than two years of its opening.