"Based on a tip-off that Chhota Shakeel sent two men to kill BJP leaders, the ATS team raided a hotel on Relief Road in Ahmedabad late Tuesday night. The accused fired one round at the team when police tried to catch him," Mr Jadeja told reporters in Gandhinagar. 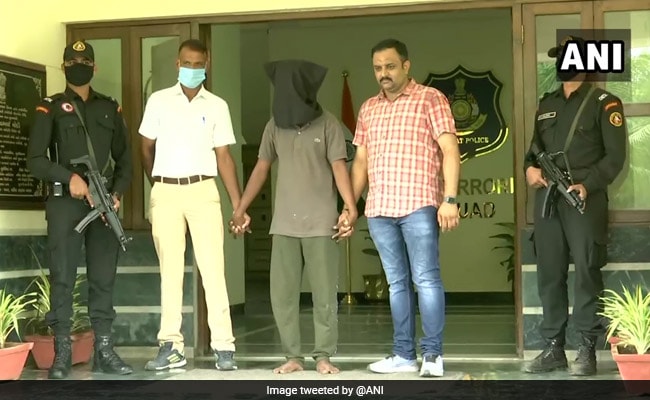 The Gujarat Anti-Terrorist Squad has arrested a ''sharp shooter'' who was allegedly sent to Ahmedabad by gangster Chhota Shakeel to kill BJP leaders, Gujarat Minister of State for Home Pradeepsinh Jadeja said on Wednesday.

Search is underway for an accomplice of the accused, Mr Jadeja told reporters in Gandhinagar.

Since preliminary investigation revealed that BJP leader and former Gujarat Home Minister Gordhan Zadafia was one of the targets, Mr Jadeja said he has asked the state director general of police to increase Gordhan Zadafia's security.

"Based on a tip-off that Chhota Shakeel sent two men to kill BJP leaders, the ATS team raided a hotel on Relief Road in Ahmedabad late Tuesday night. The accused fired one round at the team when police tried to catch him," Mr Jadeja told reporters in Gandhinagar.

The accused has been identified as Irfan Shaikh, 23, a resident of Chembur in Mumbai, an ATS officer said.

"The ATS found Zadafia's information in the mobile phone of the arrested person. A video of the state BJP headquarters 'Kamalam' was also found in it," Mr Jadeja said.

Search is on for his accomplice, who was not present at the spot when the police raided the place, he said.

Shaikh, who landed in Ahmedabad on Tuesday morning, was staying in a hotel on Relief Road.

He fired one round at the ATS team during the late night operation following which he was arrested, a senior ATS official said, adding that two pistols were recovered from his possession.

After checking in the hotel on Tuesday morning, Shaikh first went to Gandhinagar to conduct a recce of the state BJP headquarters, another official said.

"He came back to the hotel after making a video of the BJP office from outside. He was waiting for his accomplice when we raided his room. We have learnt that the accused was in contact with his handler, whose location is unknown," the official added.

Meanwhile, talking to reporters in Gir Somnath district, Gordhan Zadafia said he was informed in the morning that a man was sent to kill him.

"Pradeepsinh informed me in the morning that a sharp shooter has been caught before he could harm me. Such attempts were made in the past too. I am not worried because the state government is taking necessary steps for my security," said Mr Zadafia, who was Gujarat's Minister of State for Home in 2002.

He is currently on a four-day tour of the Saurashtra region with state BJP chief CR Paatil.

WHO Lauds Gujarat's Efforts In Containing Spread Of Coronavirus