Over 100 Shops Gutted in Fire in Agra 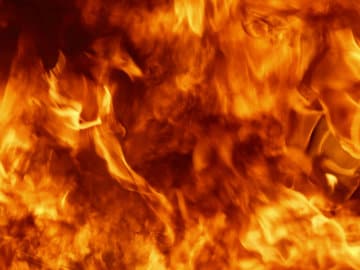 Agra: More than 100 shops selling cosmetics and garments were gutted in a major fire in Lohar Gali in central Agra early on Saturday.

Scores of fire tenders from Agra and neighbouring districts were busy fighting the fire. Water scarcity had hit the operations.

The loss due to the fire has been estimated to be around Rs. 100 crores.


Shopkeepers protested at the lack of official concern and delay in response by the agencies.

The fire might have been caused by short-circuit, said police.

Promoted
Listen to the latest songs, only on JioSaavn.com
Lohar Gali close to the Agra Fort railway station is the hub of cosmetics outlets, catering to not only Agra but also nearby towns.

Luckily, the fire did not spread to neighbouring Kinari Bazar, Subhash Bazar and Rawat Para, which have numerous shops selling clothes, jewellery and spices.