US Marines In New Helicopter Strikes In Libya 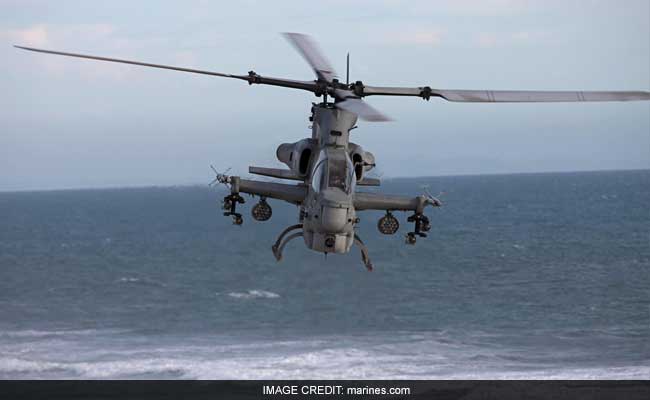 Rome: US Marines are using Super Cobra attack helicopters to mount close-range airstrikes against ISIS terrorists in the Libyan city of Sirte, the US navy said Thursday.

The gunship attacks, the first of their kind to be confirmed in over two months, were launched overnight from the USS San Antonio, an amphibious transport dock ship deployed off the North African state.

A statement from the US navy's base at Naples in southern Italy said the Cobras were carrying out "precision airstrikes" during combat operations in Sirte, a coastal city where ISIS loyalists established a base in 2015.

The US Naval Forces in Europe base did not immediately provide further details of the scope, objectives or impact of the attacks.

They were part of a sea-borne air operation launched by President Barack Obama in August in support of Libya's fledgling national unity government's attempt to drive ISIS out of Sirte.

Hundreds of airstrikes have been unleashed but the only previously confirmed deployment of the Cobra gunships came at the end of August.

At the time, the Pentagon was predicting that US involvement in the battle for Sirte would last "weeks not months".

Forces loyal to Libya's Government of National Accord launched their offensive on Sirte in May.

They claimed last month to be closing in on the complete liberation of the city from the jihadists.

The Pentagon said in August that it estimated that there were around 1,000 hardened fighters in Libya who were loyal to ISIS.

The US attacks involved forces from the 22nd Marine Expeditionary Unit (MEU), a 2,500-strong task force comprised of elements from both the elite Marine Corps and the US Navy.

Promoted
Listen to the latest songs, only on JioSaavn.com
The Pentagon insists operations to support the GNA will be conducted only from the air but officials acknowledge that small teams of US special forces are in Libya gathering intelligence and liasing with forces on the ground.