US Embassy Road Signs Go Up In Jerusalem

US President Donald Trump announced the move in December, saying he was making good on U.S. legislation and presidential pledges. 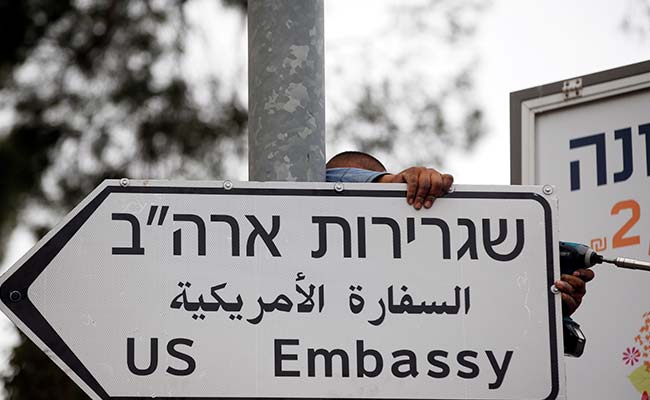 Workmen installing the signs, in English, Hebrew and Arabic (Reuters)

JERUSALEM: At least three U.S. Embassy road signs went up in Jerusalem on Monday ahead of next week's opening of the mission in accordance with President Donald Trump's recognition of the city as Israel's capital.

A Reuters witness saw workmen installing the signs, in English, Hebrew and Arabic, near the south Jerusalem location of a U.S. consulate building that will be repurposed as the embassy when it is officially relocated from Tel Aviv on May 14.

Trump announced the move in December, saying he was making good on U.S. legislation and presidential pledges, dating back decades, to back Israel's designation of Jerusalem as its capital.

Other world powers have not done so, sidestepping one of the thorniest disputes between Israel and the Palestinians, and Trump's policy shift drew consternation among some U.S. allies.

The Palestinians want their own state with a capital in East Jerusalem, which Israel captured from Jordanian control in the 1967 war and annexed in a move not recognised abroad. 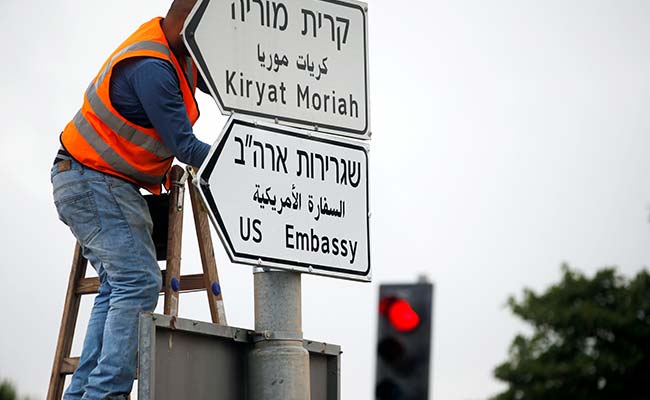 A worker hangs a road sign directing to the US embassy, in the area of the US consulate in Jerusalem (Reuters)

"This move is not only illegal but will also thwart the achievement of a just and lasting peace between two sovereign and democratic states on the 1967 borders, Israel and Palestine living side by side in peace and security," Palestinian negotiator Saeb Erekat said in a statement.

The Trump administration has left the diplomatic door open for a possible Palestinian presence in Jerusalem, however.

"By recognising Jerusalem as the capital of Israel and the seat of its government, we're recognizing reality," U.S. Secretary of State Mike Pompeo said during a visit to Israel last week.

"I also stress, as President Trump has said in December, the boundaries of Israeli sovereignty in Jerusalem remain subject to negotiations between the parties, and we remain committed to achieving a lasting and comprehensive peace that offers a brighter future for both Israel and the Palestinians."

Street signs in Israel have sometimes fallen victim to political vandalism, with Jews erasing Arabic or Arabs the Hebrew. An Israeli police spokesman played down such prospects for the U.S. embassy signs.

Promoted
Listen to the latest songs, only on JioSaavn.com
"We're not guarding the embassy signs but of course there is upgraded security around the embassy which is already being implemented," he said. "There are also new CCTV cameras that have been set up in the area. The perimeter and all movement in the area are being closely watched."
© Thomson Reuters 2018