Read inOther Languages
This Article is From Jul 19, 2018 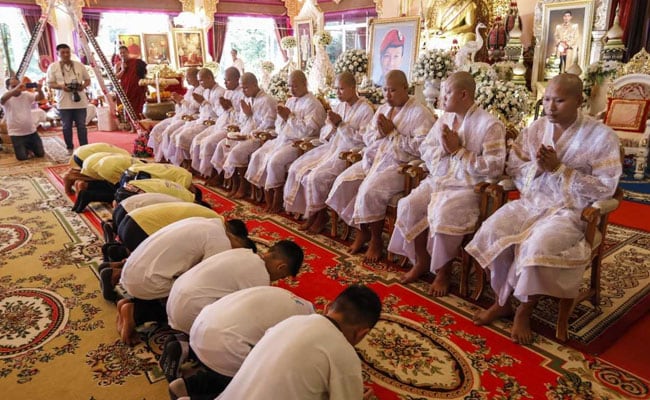 The boys sat together in the temple while chants of Buddhist monks filled the room. (AFP)

Members of the "Wild Boars" football team rescued from a cave in northern Thailand prayed for good luck at a Buddhist temple on Thursday morning after spending their first night back home with family.

The teammates and coach were discharged from hospital Wednesday after recuperating for a week from their 18-day ordeal inside Tham Luang cave with no food and only rainwater to drink.

Authorities organized a tightly controlled press conference with the boys the same evening in which they recounted drinking water that dripped from rocks and trying to dig their way out during the first nine days before they were located by British divers.

After spending a night at home many of the boys attended a ceremony the next morning at Wat Pha That Doi Wao in Mae Sai near the Myanmar border where they prayed for longevity and a good life.

They also paid tribute to a former Thai Navy SEAL diver Saman Kunan, who ran out of oxygen and died while helping resupply air tanks along the cave's narrow passageways.

He was the only casualty in the otherwise successful operation that was dubbed "Mission Impossible".

Wearing threads of white string tied around their wrists and holding hands together in prayer, the boys sat together in the temple while chants of Buddhist monks filled the room.

Officials have advised families of the youngsters to avoid interviews with the media for one month to let them settle back into their normal routines. 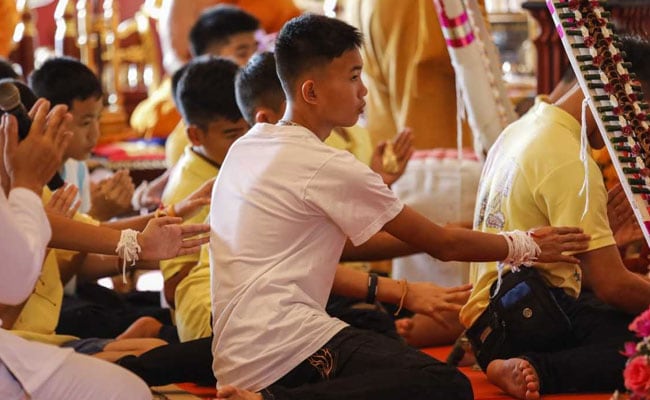 "They will live with their families first," Punnawitch Thepsurin, the director of a school in the area, said, adding that they will not resume their studies immediately.

But cameras flashed away as the now-famous Wild Boars entered the temple on Thursday, in a sign of the ongoing interest in the story.

Film production houses have said they are looking into a Hollywood-style treatment of the harrowing ordeal, which captivated people around the world as the risky operation to extract the team unfolded.

They walked into the cave on June 23 after football practice, thinking they would only be there for an hour to explore, and then vanished for days until they were finally found.

Foreign divers and Thai Navy SEALs spent three days bringing the boys out by diving and carrying them through the waterlogged corridors of Tham Luang.

The youngsters, aged 11 to 16, wore full-face oxygen masks and were sedated to keep them calm during the high-stakes operation.

Later rescuers marvelled that nothing had gone wrong in the extraction, which ended on July 10 when the last five were pulled out.