Video: This April 2014 "sled tests" mimicked a rear-end crash at 30 mph and showed what happened when a crash test dummy representing a 6-month-old baby was sitting in a rear-facing infant carseat. (Robson Forensic, Inc.)

A new study showing the potential for children in rear-facing car seats to hit their heads during rear-end crashes worries some safety experts, who say they're concerned it will wrongly discourage parents from keeping children in the safest rear-facing position.

The study, published in the October issue of the Journal of Traffic Injury Prevention, found that an infant-sized crash-test dummy registered serious head injuries when its rear-facing car seat pitched forward - toward the back of the vehicle - in rear-end crash tests. Test videos show the top of the car seat and the dummy's exposed head being thrown into the back of the vehicle seat in which the car seat was attached. The estimated head injuries were more severe, the study found, when the car seat was attached via the vehicle seat's lower "LATCH" anchors compared to seat belts.

"It's basic physics" in a rear-end collision, said Jamie Williams, one of the study's authors and a biomedical engineer for Robson Forensic, a Lancaster, Pennsylvania, firm that provides expert testimony in lawsuits, including car crashes. "It shouldn't be a surprise to anyone. The only surprise was the magnitude of the head strikes. We didn't think it would be that bad."

Williams stressed that infants and young children should remain in rear-facing car seats. The study didn't conclude they're unsafe, she said, only that they could be made safer for rear-end crashes. She noted that in Sweden, top tethers from the car seats to the vehicle floor prevent rear-facing seats from tilting into vehicle seat backs.

But some child safety experts say that while the subject warrants more research, they're concerned the findings could be misunderstood and confuse parents.

The experts say they're worried parents will hear about potential head injuries in rear-end collisions and wrongly conclude that children aren't safe rear-facing. On the contrary, they say, studies show infants and young toddlers are five times safer riding backwards because the car seat can better support their heavy heads, weak necks and vulnerable spines. That's particularly true, they say, in front-end crashes, which, along with side-impact collisions, account for far more child deaths and serious injuries than rear-end crashes.

Since 2011, the American Academy of Pediatrics has recommended that children be restrained rear-facing until at least age 2, or up to the car seat's maximum height and weight for that position. Twelve states require children to sit rear-facing until age 1, and three states mandate it until age 2. The District, Maryland and Virginia require that children under age 8 be restrained in child safety seats, but don't specify a direction.

Child safety experts say it's possible for a rear-facing car seat to rotate forward, toward the child's feet, and hit the seat back. It occurs more severely in a rear-impact crash, they say. It also can occur in front-end crashes when a car seat that's initially thrust forward "rebounds" back again.

But Kathleen Klinich, associate research scientist at the University of Michigan Transportation Research Institute and a car-seat researcher, said she is concerned that the study is "unnecessarily alarmist." She said she's never heard of a child being injured or killed in a rear-facing car seat because of the seat throwing the child's head into the vehicle seat back. It "certainly" can occur, she said, but children likely remain protected within the frame of the car seat, or required padding on the vehicle seat prevents serious injury.

"We don't see any field data of kids being injured rear-facing," Klinich said. "We have strong data showing rear-facing restraints are highly effective. . . . Getting more kids to be rear-facing would save more kids."

Jessica Jermakian, a senior research scientist for the Insurance Institute for Highway Safety, said the findings are "misleading" because rear-impact crashes, while quite common, generally occur as five- or 10-mph fender-benders - far slower than the 30-mph speed used in the crash tests. Higher-speed hits from behind often result in one vehicle "intruding" into another, killing the occupants regardless of how they're belted in, experts say. 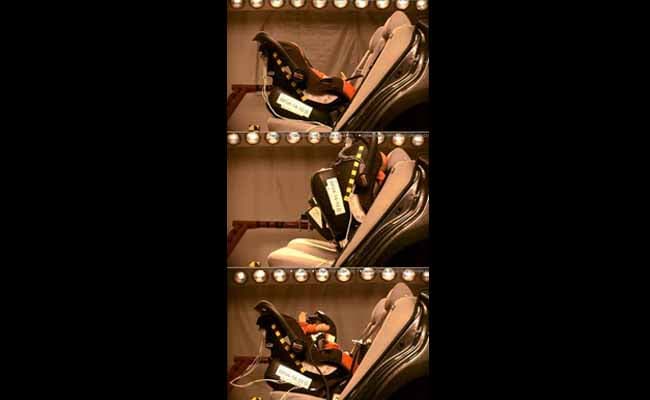 These frames show the motion of the test dummy representing a 6-month-old child in a rear-facing car seat as the test vehicle is struck from behind by a crash sled going 30 MPH. Image courtesy: Robson Forensic/The Washington Post

"Yes, it can happen, but when you talk about the world of serious crashes that people get into, severe rear-impacts are rare," Jermakian said. Children "are much more likely to be in a significant frontal impact (crash), and that child is significantly safer in a rear-facing car seat than forward-facing."

Even so, the potential for rear-facing car seats to pitch children into the seat back has drawn attention in other countries and among some car seat manufacturers. Canada and some European countries have required car seats to limit "rebounding" for years. Some manufacturers, such as Britax, offer an "anti-rebound bar" for some seats, while others, such as Combi, provide for rear tether straps similar to those used in Sweden.

NHTSA spokesman Gordon Trowbridge said the agency hasn't fully reviewed the study. In response to e-mailed questions, Trowbridge wrote, "Real-world crash data does not indicate children in rear-facing car seats are being injured by contacting the seat on rebound."

Among children under 1 who were killed in car seats between 2005 and 2009, 15 percent were in rear-end collisions, compared to about one-third each in frontal and side crashes, he wrote. A 2001 study of fatal accidents with children in car seats found that rear-end crashes were "unsurvivable" because the child's seating area was consumed in the crash.

Trowbridge said the agency is focused on making LATCH easier to use so more car seats are installed properly.

But Williams said she believes the crash forces on rear-facing car seats in rear-end collisions have gotten short shrift. She said she and her study co-authors, Carrie O'Donel and Peter Leiss, couldn't find previous research on it. She said the 30-mph speed used in the rear-end crash tests mimicked the severity of speeds used in federal frontal crash tests. For a rear-facing child, she said, a rear-end collision can be similar to a frontal crash.

One of the most concerning findings, she said, was that, even when the infant dummy's head had hit the seat back, the car seat returned to the correct position. In a real crash, Williams said, an emergency first responder or parent might not realize that the child's head had hit the seat back and might assume the crying child was merely upset. That could result in children not getting examined or treated for possible head injuries, she said.

Because infants and young toddlers can't speak, they can't tell doctors that their head hurts or they feel nauseated - symptoms of a potentially serious concussion. She said studies show that early childhood head injuries often don't become apparent until a child starts school. By then, she said, parents, doctors and teachers might not link cognitive problems to a traffic crash several years earlier.

"We don't get to choose what kind of car crash we're in," Williams said. "We've made huge strides over the past several decades in child safety, but it doesn't mean the job is done. We can do better."

Most car-seat experts said they remain focused on getting more parents to buckle up their children and install car seats properly. More parents, they say, need to get the message that children who are properly restrained - including rear-facing up to age 2 - are the best protected passengers in any car.

"We still need to get more kids rear-facing and get more kids properly restrained," Klinich said. "That will improve things more than trying to improve (car seat) designs to prevent rebound."