Vladimir Putin told a news conference on Monday that Ukrainian drones had used the same marine corridors that grain ships transited under the U.N.-brokered deal. 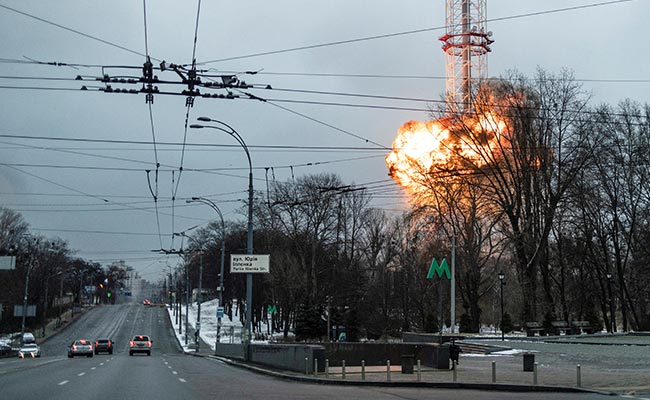 Ukraine's military said it had shot down 44 of 50 Russian missiles.

President Vladimir Putin said Russian strikes on Ukrainian infrastructure and a decision to freeze participation in a Black Sea grain export programme were responses to a drone attack on Moscow's fleet in Crimea that he blamed on Ukraine.

Putin told a news conference on Monday that Ukrainian drones had used the same marine corridors that grain ships transited under the U.N.-brokered deal.

Kyiv has not claimed responsibility for the attack and denies using the grain programme's security corridor for military purposes. The United Nations said no grain ships were using the Black Sea route on Saturday when Russia said its vessels in Crimea were attacked.

Meanwhile, on the 250th day of a war that has ground on since Russia's invasion of Ukraine on Feb. 24, Russian missiles rained down across the country. Explosions boomed out in Kyiv, sending black smoke into the sky.

Russian forces shelled infrastructure in at least six Ukrainian regions on Monday, the General Staff of the Ukrainian Armed Forces said in a statement on Facebook.

"That's not all we could have done," Putin said at the televised news conference, indicating more action could follow.

Oleh Synehubov, the governor of the northeastern Kharkiv region, said on Telegram that about 140,000 residents were without power after the attacks, including about 50,000 residents of Kharkiv city, the second largest city in Ukraine.

Ukraine's military said it had shot down 44 of 50 Russian missiles. But strikes left 80% of Kyiv without running water, authorities said. Ukrainian police said 13 people were injured in the latest attacks.

For the past three weeks, Russia has attacked Ukrainian civil infrastructure using expensive long-range missiles and cheap Iranian-made "suicide drones" that fly at a target and detonate.

Moscow announced the suspension on Saturday of its role in the grain programme after accusing Ukraine of using air and maritime drones to target vessels in the Bay of Sevastopol. It suggested one of the drones may have been launched from a civilian vessel chartered to export food from Ukrainian ports.

"Ukraine must guarantee that there will be no threats to civilian vessels or to Russian supply vessels," Putin said on Monday, noting that under the terms of the grain deal Russia is responsible for ensuring security.

"We understand what we offer the world. We offer stability on the food production market," Zelenskiy told a news conference. He earlier said Moscow was "blackmailing the world with hunger". Russia denies that is its aim.

The U.S. State Department said on Monday that food prices rose because of uncertainty around the Black Sea grain deal and that Russia's suspension of its participation was having "immediate, harmful" impacts on global food security.

The news that Moscow was pulling out of the deal had sent global wheat prices soaring by more than 5% on Monday morning.

Nevertheless, the continued flow of grain exports from Ukrainian ports suggested a new world food crisis had been averted for now.

Ukraine and Russia are both among the world's largest exporters of food. For three months, the U.N.-backed deal has guaranteed Ukrainian exports can reach markets, lifting a Russian de facto blockade.

The ships that sailed on Monday included one hired by the U.N. World Food Programme to bring 40,000 tonnes of grain to drought-hit Africa.

Also on Monday, the Russian Defence Ministry said Moscow had completed the partial military mobilisation announced by Putin in September and no further call-up notices would be issued.

Putin announced Russia's first mobilisation since World War Two on Sept. 21, one of a series of escalatory measures in response to Ukrainian gains on the battlefield.

Defence Minister Shoigu said at the time that some 300,000 additional personnel would be drafted. But the mobilisation has proceeded chaotically and thousands have fled Russia to avoid being drafted.