Kim Yong Chol will head an eight-member delegation to arrive on Sunday for the Games' closing ceremony which will also be attended by US President Donald Trump's daughter Ivanka Trump, creating protocol headaches for Seoul officials. 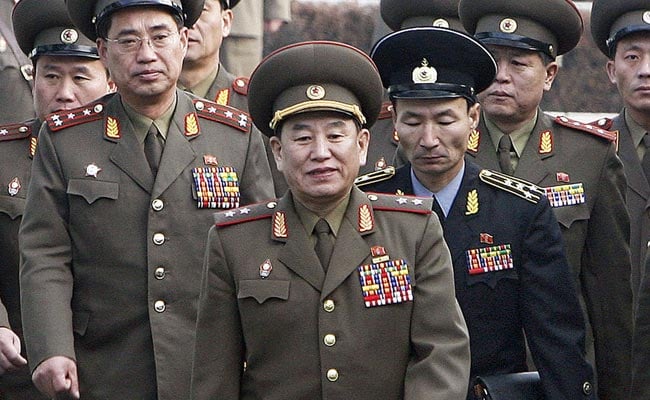 Kim Yong Chol will head an eight-member delegation to the Olympics closing ceremony with Ivanka Trump.

Seoul, South Korea: South Korean lawmakers protested Friday over a visit by a top North Korean general for the Pyeongchang Olympics, labelling him a war criminal over the 2010 sinking of a warship and calling for his execution.

Kim Yong Chol will head an eight-member delegation to arrive on Sunday for the Games' closing ceremony which will also be attended by US President Donald Trump's daughter Ivanka, creating protocol headaches for Seoul officials.

Kim is widely blamed for a spate of attacks against the South including the torpedoing nearly eight years ago of the Seoul's Cheonan corvette, with the loss of 46 lives.

Some 70 lawmakers of the conservative Liberty Korea Party staged a protest outside the presidential Blue House, urging President Moon Jae-in to scrap the visit.

"Kim Yong Chol is a diabolical war criminal who attacked the South... He deserves death by hanging in the street," the party's parliamentary floor leader Kim Sung-tae said in a statement.

"Even if the heavens split in two, we cannot allow such a heinous criminal who must be sliced to death -- to be invited to the Olympics closing ceremony," he said.

Unification ministry spokesman Baek Tae-hyun said the South Korean government was aware of widespread misgivings about Kim Yong Chol's visit to the South, but accepted it as the "chances for improving inter-Korean ties and a peace settlement might be improved".

The Pyeongchang Olympics have seen a charm offensive by the North, which sent leader Kim Jong Un's sister to the opening ceremony as it seeks to loosen sanctions against it and weaken the alliance between Seoul and Washington.

US Vice President Mike Pence was also present for the start of the Games, and sat only a few seats away from Kim Yo Jong, without exchanging words with her having earlier visited a memorial to the Cheonan and condemned the North for abusing human rights.

Officials from both Seoul and Washington say there is little or no prospect of a meeting between Ivanka Trump a businesswoman and former model turned key adviser to her father and the North Korean representatives.

But Seoul authorities are still struggling over how to manage their presence at the same event.

Ivanka Trump was due to arrive in the South on a commercial flight from the US on Friday afternoon, and have dinner with Moon at the Blue House.

Officials said the meal would be Korean food including bibimbap, prepared according to kosher principles and served to a background of traditional Korean music.

Seoul blames the North for the 2010 sinking of the Cheonan widely believed in the South to have been ordered by Kim Yong Chol although Pyongyang denies responsibility.

At the time he was head of the North's Reconnaissance General Bureau, which is responsible for espionage and sabotage activities against the South.

Kim has also been linked to the shelling of the South's Yeonpyeong island the same year, which killed four people.

Unification ministry spokesman Baek said the sinking of the Cheonan was "certainly the North's work" but sought to play down Kim Yong Chol's role.

"There are limits to pinpointing those who were directly responsible", he said.

Kim Yong Chol's presence is widely seen as a demonstration of how Pyongyang is using the Olympics-driven rapprochement to test the limits of multiple different sanctions imposed on it over its banned nuclear weapons and ballistic missile programmes.

The general is blacklisted under Seoul's unilateral measures against the North meaning he is subject to an assets freeze although he is not named in the UN Security Council's sanctions.

Promoted
Listen to the latest songs, only on JioSaavn.com
In an editorial, the conservative Chosun Ilbo daily said: "By sending Kim Yong Chol, the North is in effect insulting the South and the bereaved victims of the Cheonan."

(Except for the headline, this story has not been edited by NDTV staff and is published from a syndicated feed.)
Comments
Kim Yong CholIvanka TrumpPyeongchang Olympic Games