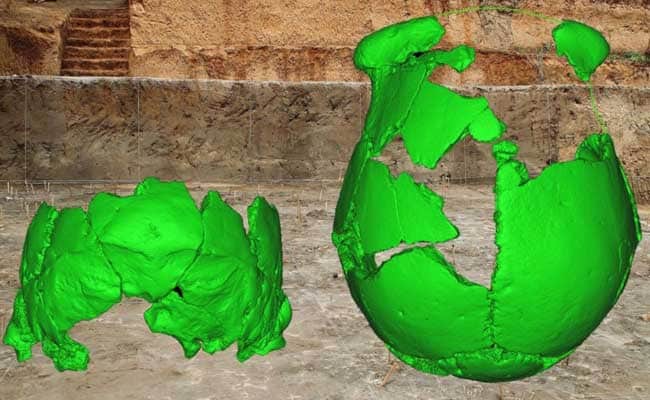 Modern humans outlasted the Neanderthals by about 40,000 years and counting. But don't pat yourself on the back too firmly for outliving those troglodytes. Neanderthals crafted tools and tamed fire. They cared for their dead. Animal horns and blackened fire pits encircling the remains of a Neanderthal toddler suggest a 42,000-year-old funeral rite. If a Neanderthal indeed wore a talon necklace, as a collection of polished eagle claws indicate, they beat us to jewelry, too. Perhaps one of your ancient ancestors found the claw necklaces sexy: Some scientists theorize humans gave Neanderthals genital herpes and tapeworm parasites.

Their proportions, however, remained distinctly Neanderthal. Neanderthal bodies were shorter and stockier, more Gimli son of Gloin than Gigi Hadid. Their skulls were built differently, too, with a few features - like heavy brow ridges - particularly unlike ours.

Which makes a pair of newly-described skulls something of a wonder. The partial skulls have features up to this time unseen in the hominid fossil record, sharing both human and Neanderthal characteristics.

"It is a very exciting discovery," as Katerina Harvati, an expert in Neanderthal evolution at the University of Tubingen in Germany who was not involved with the research, told The Washington Post. "Especially because the human fossil record from East Asia has been not only fragmentary but also difficult to date."

Excavators dug up the skull cap fragments in 2007 and 2014, in Lingjing, located within China's Henan province. The diggers discovered two partial skulls in a site thought to be inhabited 105,000 to 125,000 years ago, during an epoch called the Pleistocene. The owners of the skulls were good hunters, capable of fashioning stone blades from quartz. Ancient bones of horses and cattle, as well as extinct woolly rhinoceros and giant deer, were found strewn nearby the skull remains.

Researchers from the Chinese Academy of Sciences, in Beijing, and at Washington University in St. Louis, Mo., described the skulls as having a "mosaic" of features. Writing Thursday in the journal Science, they noted similarities with three different groups: The brow ridges of the skulls were modest and the skull bone mass was reduced, like features of early modern humans living in the Old World. The skulls had a broad and flat brainpan, like other eastern Eurasian humans from the mid-Pleistocene epoch. Their semicircular ear canals and the enlarged section at the back of the skull, however, were like a Neanderthal's.

"Eastern Asian late archaic humans have been interpreted to resemble their Neanderthal contemporaries to some degree," said Xiujie Wu, an author of the study at the Chinese Academy of Sciences's Institute of Vertebrate Paleontology and Paleoanthropology, in a news release. "Yet it is only with the discovery of two human crania," she said, "that the nature of these eastern Eurasian early Late Pleistocene archaic humans is becoming clear."

The large brains of these archaic humans ruled out Homo erectus and other known hominid species, the scientists wrote. The researchers were vague about what they thought the species might be, describing them only as archaic humans. But Wu told Science Magazine that the fossils could represent "a kind of unknown or new archaic human that survived on in East Asia to 100,000 years ago."

Other experts speculated that these skull caps could represent a little-known human relative: the mysterious Denisovans, a species that currently exists only as sequenced DNA taken from finger bone and a tooth found in a Siberian cave. Thought to live some 100,000 to 50,000 years ago, the Denisovans shared genetic material with humans as well as Neanderthals. A 2015 analysis of the specimen scraps indicated that the Denisovans lived for some 60,000 years side-by-side with Neanderthals and humans in Asia.

(That humans interbred with Neanderthals is, of course, old news. Many humans who have Eurasian ancestry carry bits of Neanderthal DNA, around 2 to 5 percent of it, within their genes. In the process of swapping DNA, Neanderthals lent us genes for bad skin while boosting our immune responses.)

The cranial remains "show an intriguing combination of Neanderthal-like as well as archaic features," Harvati said. "This would be the combination that one would expect based on the ancient DNA analysis of Denisovans, who were closely related to Neanderthals."

The paper did not mention Denisovans, the study authors said, because DNA extraction attempts failed to yield genetic material.

But the lack of even a nod toward the Denisovans in the new report was a point that Philipp Gunz, an evolutionary anthropologist at the Max Planck Institute in Leipzig, found surprising. The fossils, which Gunz called "remarkable," as he told The Post, "certainly look like what many paleoanthropologists (myself included) imagine the Denisovans to look like."

Time may tell - if scientists can pull off a successful laboratory analysis.

"Unfortunately, however, it is not possible to infer skull morphology from ancient DNA directly," Gunz said. "I therefore hope that future studies will be able to extract ancient DNA from these or similar specimens."

(This story has not been edited by NDTV staff and is auto-generated from a syndicated feed.)
Comments
Modern humansnew speciesChinaNational Health Scienc