On a four-day cruise, the ship sailed past the sites of key developments including the Red Sea project -- designed to be a Maldives-style resort destination embracing dozens of picturesque islands -- and Amaala, a luxury tourism project. 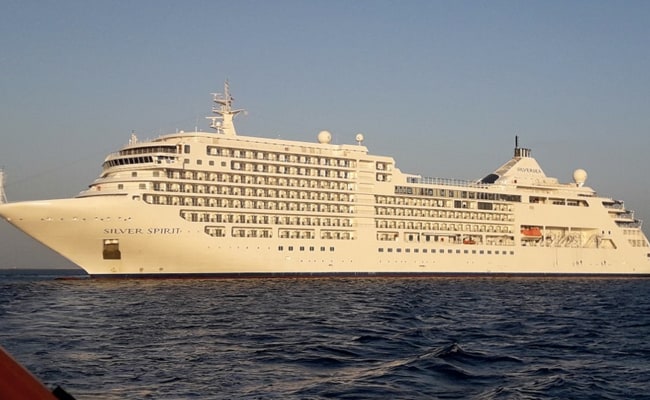 In August, the cruise liner Silver Spirit began offering tours along the unspoilt coastline which the petro-state aspires to turn into a global tourism and investment hotspot as part of a plan to reduce reliance on oil revenue.

Chartered by a company owned by the Saudi Public Investment Fund, the luxury ship offers a window into multi-billion-dollar "giga projects" that the kingdom is forging ahead with despite a sharp economic downturn.

"We are introducing the Red Sea to the world," Tourism Minister Ahmed al-Khatib told AFP in an interview aboard the ship.

"We are unlocking the value of the Red Sea."

On a four-day cruise, the ship sailed past the sites of key developments including the Red Sea project -- designed to be a Maldives-style resort destination embracing dozens of picturesque islands -- and Amaala, a luxury tourism project.

For a few hours, it also anchored off two islands including Sindala, which forms a sliver of NEOM, a $500 billion planned megacity that is roughly the size of Belgium.

Otherwise off-limits to the public, cruise passengers toured the tiny coral reef-fringed island in golf carts and dined at a Michelin-starred pop up restaurant perched along the shore.

Sceptics question the viability of the giant projects amid a precipitous fall in government revenue due to a virus-led economic contraction and a sharp drop in oil prices.

The world's top crude exporter says it plans to slash government spending by more than seven percent next year as the budget deficit is expected to widen to 12 percent of gross domestic product in 2020.

But simultaneously, the government is awarding multi-billion dollar contracts for what would be the world's largest construction projects.

The Saudi PIF -- the kingdom's sovereign wealth fund -- has handed out a series of contracts to develop NEOM, most recently to American project management firm Bechtel and infrastructure consulting firm Aecom.

The Red Sea Project has given deals worth five billion riyals ($1.33 billion) so far and is expected to award more worth 3.5 billion riyals by the end of this year, according to the Middle East Economic Digest (MEED).

"The new projects on the Red Sea coast are pushing ahead despite Covid-19 and low oil prices," Colin Foreman, an editor at MEED, told AFP.

"Over the coming three years, Saudi Arabia's government will be smaller but its projects will be bigger."

Khatib, who sits on the boards of several megaprojects including NEOM, said the developments were moving "very fast" with "unlimited support" from the top Saudi leadership.

The kingdom introduced the high-end cruise for the first time just as the pandemic put a break on global tourism.

With the cheapest tickets priced around 6,000 riyals ($1,600), the cruise aims to lure deep-pocketed domestic tourists amid a wider disruption in international travel.

As well as spacious suites and private butlers, the trip offered sartorial freedoms that are rare on dry land. Almost entirely absent were the cloak-like abaya robes mandatory for Saudi women.

However, to maintain the privacy of passengers in their beachwear, mobile phones were required to be placed in sealed pouches during island stopovers.

And in a country that forbids alcohol, the ship's bars offered only alcohol-free Merlot, Chardonnay and lager beer.

The Silver Spirit set sail from the King Abdullah Economic City, a multi-billion dollar project close to the western city of Jeddah that serves as a cautionary tale for the giga projects it showcases.

The mammoth development, launched more than a decade ago as part of a diversification plan to build new cities, appears largely empty and underscores the kingdom's longstanding struggle to lure investment in areas other than fossil fuels.

"The political commitment to steam ahead with giga projects seems to be there," said Karen Young, a scholar at the American Enterprise Institute.

"But spending limited state resources on projects not focused on job creation or getting the highest number of people off of public sector payrolls is not a positive move towards economic diversification."