"Are You Still A Believer In Santa Claus?" Trump Asks 7-Year-Old

Just as it has since the 1950s the Canadian and American defense agency NORAD is delivering live updates on the man in the red suit's international gift delivery route. 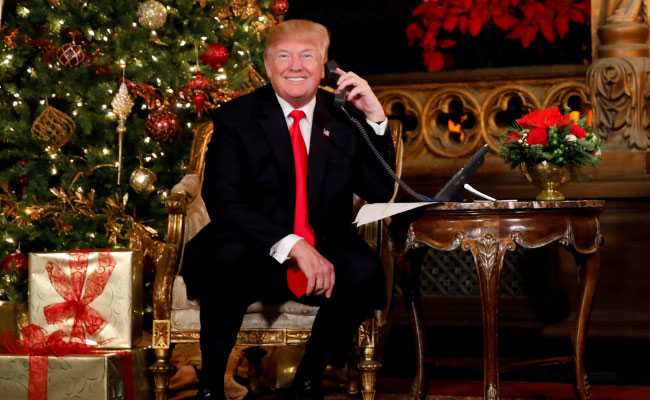 The US government shutdown may have temporarily dimmed Washington's National Christmas Tree but never fear, Santa Claus is still comin' to town -- and the military is tracking his path.

Just as it has since the 1950s the Canadian and American defense agency NORAD is delivering live updates on the man in the red suit's international gift delivery route.

NORAD eased the fears of good little boys and girls concerned the tracker might be down, after US lawmakers failed agree on a budget, triggering a partial shutdown of federal services, including the maintenance of the Christmas tree outside the White House.

"In the event of a government shutdown, NORAD will continue with its 63-year tradition of NORAD Tracks Santa on December 24," the agency tweeted of the tracker, the Pentagon's largest public outreach program.

"Military personnel who conduct NORAD Tracks Santa are supported by approximately 1,500 volunteers who make the program possible each and every year."

The 3-D, interactive website at www.noradsanta.org showed Santa on his delivery route, allowing users to click and learn more about the various cities along the way.

In addition to tracking St Nick, volunteers donning military garb and Santa hats also respond to tens of thousands of calls and emails from eager children hoping to probe for details including their Christmas wish lists.

Do you believe in Santa?

The Trumps, who canceled their holiday trip to Mar a Lago, their residence and club in Florida, in light of the shutdown, took a turn fielding calls from the White House on Monday evening.

"Hello, is this Coleman? Merry Christmas. How are you? How old are you?" Trump said when answering one call.

But he went on to raise doubts about Santa's existence, asking: "Are you still a believer in Santa Claus? 'Cuz at seven it's marginal, right?"

Melania apparently managed to skirt that sensitive issue in calls she answered.

"I want to wish you a Merry Christmas. Thank you. Nice talking to you," she told one caller. 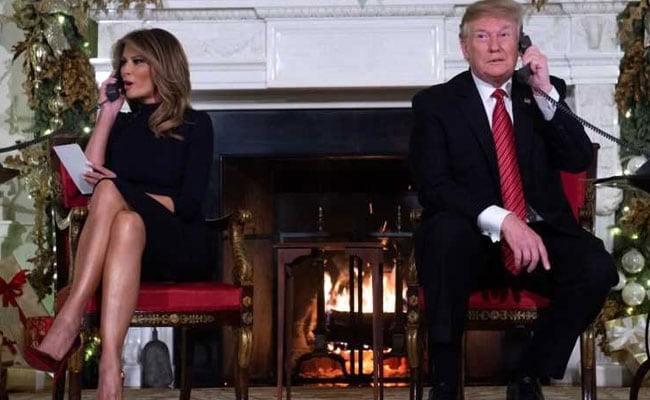 The Santa tracker presented by the North American Aerospace Defense Command (NORAD) dates to 1955, when a Colorado newspaper advertisement misprinted a phone number to connect children with Santa and mistakenly directed them to the military nerve center hotline.

To avoid disappointing the eager children, NORAD's director of operations at the time, Colonel Harry Shoup, ordered his staff to check the radar to see where Santa might be and update the children on his location.

Decades later volunteers are armed with a 14-page playbook with talking points to respond to queries from excited children.

The Defense Department is able to follow Santa's journey thanks to satellites that pick up heat from lead reindeer Rudolph's bright red nose, which "gives off an infrared signature similar to a missile launch," according to Politico magazine.

And for those kids skeptical of Santa's existence?

"Historical data and more than 60 years of NORAD tracking information lead us to believe Santa Claus is alive and well in the hearts of people throughout the world," the Pentagon's handbook reads.

(Except for the headline, this story has not been edited by NDTV staff and is published from a syndicated feed.)
Comments
Santa ClausUS government shutdownSanta live updates