Return Of Terror Camps In Afghanistan Will Have "Direct Impact On India": Envoy

Ambassador TS Tirumurti said the situation in Afghanistan is of deep concern to all members of the UN Security Council. 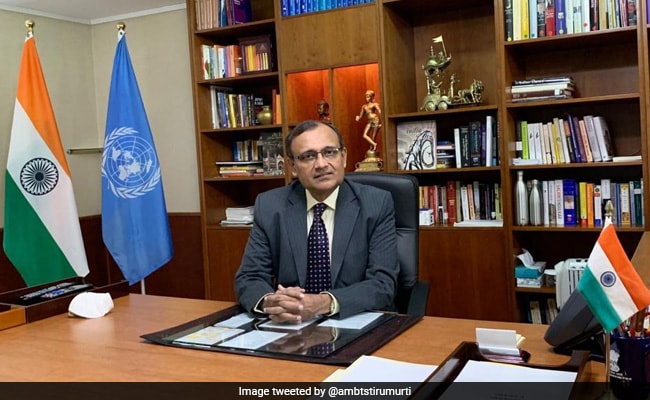 India is currently a non-permanent member of UNSC for the 2021-22 tenure (File).

The situation in Afghanistan is of deep concern to all members of the UN Security Council, India's Permanent Representative to the UN and President of Security Council for the month of August TS Tirumurti said, underlining that "we cannot have terrorist camps" once again going back into the war-torn country and this will have a "direct impact" on India.

India, currently a non-permanent member of the UN Security Council for the 2021-22 tenure, assumed the rotating Presidency of the powerful UN organ for the month of August.

"The situation in Afghanistan is of deep concern to all members of the Security Council and we have seen that in recent days, the violence is only increasing," Mr Tirumurti said at the UN Headquarters Monday.

Briefing reporters at the UN Headquarters on the Council's Programme of Work Monday, Mr Tirumurti cited a UN report that said the number of casualties in Afghanistan during May-June exceeds the number between January and April.

As far as India is concerned, he said New Delhi has mentioned very clearly that "we want to see an independent, peaceful, democratic and a stable Afghanistan. India has supported every opportunity that can bring peace, security and stability in Afghanistan."

"We are convinced that...we should address the question of violence and the targeted attacks and these are very serious concerns and all violence must come to an end. Ties with international terrorism should also be cut. We cannot have terrorist camps once again going back into Afghanistan. And this will have a direct impact on India," Mr Tirumurti said.

Noting with concern that targeted killings are increasing and women, girls and minorities are being systematically targeted, Mr Tirumurti stressed that a lasting political settlement through an inclusive Afghan-led, Afghan-owned and Afghan-controlled process is extremely important.

He underlined that it is also "important for us to protect the gains which we have had in the last nearly 20 years," adding that aspirations of the Afghan women, youth and minorities must be respected.

"They need a safe and a democratic future. I think this is where we believe that any government that comes to power in Afghanistan has to be seen as legitimate in the eyes of the people. So consequently we cannot have the unilateral imposition of will by any party. Peaceful negotiation should be taken seriously by all the parties. The dialogue, which they are having, there is a need for that to be accelerated," Mr Tirumurti said.

He further noted that these are concerns, which are common to all the members of the Security Council. "We have supported a leading role for the UN since it will definitely help in a lasting and durable outcome to the discussions which are going on."

Mr Tirumurti said durable peace in Afghanistan is important because the security and stability of Afghanistan have "direct implication on the region itself."

Underscoring that durable peace requires a "genuine double peace" - peace within and around Afghanistan, Mr Tirumurti expressed hope that whenever "we start looking at this in the Security Council, which I expect sooner rather than later, that we will look into all these aspects and see how best to support the peace talks which are going on."

In response to a question on a large number of women's rights supporters and faith leaders calling on the Security Council to authorise a peacekeeping force for Afghanistan under the Women, Peace and Security Resolution and whether this is an idea that India supports, Mr Tirumurti said at this point of time, "We are looking at how the talks shape up."

"I think it's extremely important for us to have the legitimacy to anyone who comes in power. And so we don't want a unilateral imposition of will by any particular party on Afghanistan. That is where the focus has been right now. I don't think we have quite come to the idea of a peacekeeping force in Afghanistan."

Whether the US withdrawal from Afghanistan was a timely and good idea, Mr Tirumurti said he would not comment on a country's sovereign decision. "It is the prerogative of the United States to decide what they want to do and they have taken a decision. And I think it is important for us as a Security Council to ensure that we jointly support Afghanistan in bringing a democratic and a stable society, which will respect women and minorities."

The US has already pulled back the majority of its forces from Afghanistan and is looking to complete the drawdown by August 31, ending nearly two-decade of its military presence in the country.

He added that there is a "requirement for a certain legitimacy" for the people who come to power. "That is important for every, not just every member of Security Council, but for all the neighbours or the regional countries and for all the others."

Mr Tirumurti stressed that "you cannot get this legitimacy through unilateral actions."

He said the question of a peacekeeping force in Afghanistan down the line has not been formally raised. Mr Tirumurti said that in discussions with the Secretary-General and other top UN officials, "their main concern is the safety and security of the UN mission there," especially after the recent attack on the UN's main compound in Herat, Afghanistan.