The men, who were jailed in Britain last month, were dubbed the "Mission: Impossible" gang by UK media because of their acrobatic technique, reminiscent of a famous scene in the 1996 movie in which Tom Cruise is lowered into a vault on a rope. 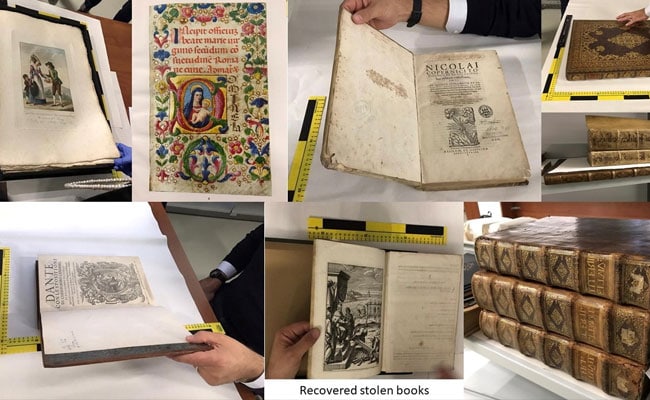 A trove of 240 rare books worth over $3.3 million have been returned to their owners after they were stolen in London by a gang of Romanian men who abseiled down from a warehouse ceiling to avoid setting off alarms.

The men, who were jailed in Britain last month, were dubbed the "Mission: Impossible" gang by UK media because of their acrobatic technique, reminiscent of a famous scene in the 1996 movie in which Tom Cruise is lowered into a vault on a rope.

The antique books, considered to be of international cultural significance, include works by English scientist Isaac Newton and Spanish artist Francisco Goya and relating to Italian astronomer Galileo Galilei, the Metropolitan Police said.

The burglary took place in January 2017 at a warehouse in Feltham, west London, where the books, which belonged to specialist dealers and had been shipped from Italy and Germany, were being stored on their way to a U.S. book fair.

After cutting holes in the perimeter fence to gain access to the warehouse, the burglars cut holes into skylights in the roof and lowered themselves down onto shelves, thus avoiding activating sensor-based alarms located by the doors.

The burglary was one of 12 carried out by the gang, linked to the Clamparu organised crime group based in the Iasi region in eastern Romania, at various locations around Britain over a two-and-a-half-year period.

London's Metropolitan Police worked on the case for over three years with counterparts in Romania and Italy.

After the books were discovered hidden underground at a house in Romania, they were transported to the country's National Library in Bucharest, where four of the five owners travelled last month to recover them.

"It was lovely to see the joy of each victim being reunited with these irreplaceable books," said Detective Inspector Andy Durham, adding that one of the book dealers, Alessandro Bado, had reacted by declaring with great gusto: "Tonight we drink like lions."