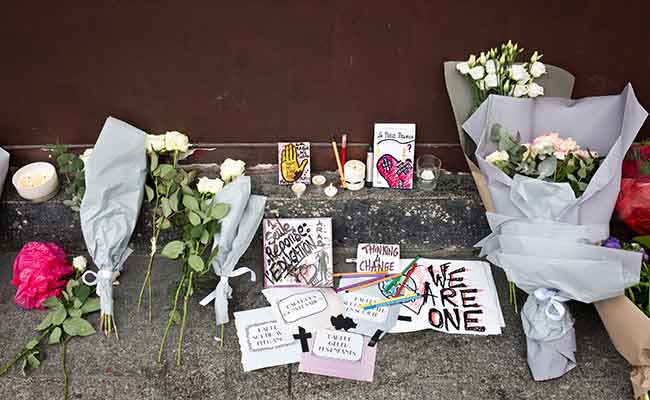 Flowers, candle are dropped off in front of the entrance the Petit Cambodge restaurant.

Paris: French authorities on Saturday said the horrific rampage of bullets and explosions that left 129 dead in Paris on Friday was carried out by suicide bombers connected to the Islamic State who broke into three groups with a single objective: to kill as many people as possible.

France - and Europe - was once again confronted with the violence of homegrown terrorism. At least one of the seven dead assailants was a French national - a 29-year-old with a criminal record who had been previously monitored by French intelligence and linked to Islamist extremism. Two others, a senior Belgian official said, appeared to be Belgian foreign fighters, including an 18-year-old who had fought in Syria.

A Syrian passport was found near the body of another assailant. Greek officials said the passport holder had arrived in Europe in October along with a record flood of refugees fleeing the war-torn Middle East. The discovery immediately raised the prospect that militants may be using the same porous routes into Europe as migrants.

President Francois Hollande called the attacks an "act of war" by the Islamic State, which issued an extraordinarily detailed claim of responsibility almost immediately after his address to the nation. Left behind after the attacks were the latest scars, Pope Francis said Saturday, from the "piecemeal Third World War." One survivor described gunmen coldly picking off hostages in a packed concert hall as if "we were birds."

The attacks - far more sophisticated and more deadly in magnitude than a siege here in January carried out by three Islamist militants - robbed France's showcase city of its rhythm of life and put Europe on alert to a new level of terrorism. In the aftermath of the most deadly assault on French soil since World War II, the Eiffel Tower was shut down "indefinitely." The Louvre closed its doors. And the country, which cherishes secular freedoms, outlawed public gatherings until at least Thursday. 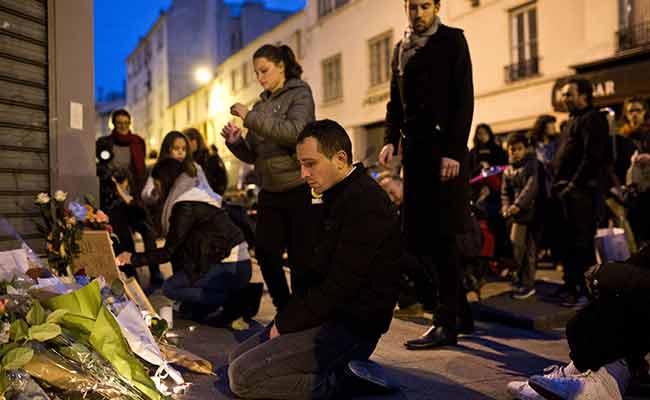 People leave flowers and signs at the Petit Cambodge, a restaurant where 12 people died during Friday's attacks in Paris. (Virginie Nguyen Hoang - For the Washington Post)

At least 99 of the 352 who were wounded - most of them injured during a hail of bullets that hit the front rows of a concert at the Bataclan, where 1,500 fans were listing to the Eagles of Death Metal - remained in serious condition, suggesting that the death toll could increase.

The extent of the violence signaled that the Islamic State is extending its reach far beyond the battlefields of the Middle East, prompting much of the rest of Europe to bolster security on Saturday, ramping up border checks and patrols at key buildings and transit points. But intelligence officials in Germany and Spain said they were focusing mainly on improving security at French schools and embassies, suggesting how France - a nation more involved in fighting Islamic extremism abroad than any of its neighbors - has emerged as the epicenter of the region's terrorism threat.

"We are facing an act of war organized by an army of terrorist jihadists that had already organized and planned attacks in the past," French Prime Minister Manuel Valls said Saturday evening. "Five attacks have been thwarted since this summer. But we have always said that there is no such thing as zero risk. We have always said that France could face new terrorist attacks."

On Saturday, candles and flowers filled an outdoor terrace at La Belle Equipe restaurant, where gunman shot into the crowd. Notes in the flowers included one that read, in French, "To our friend Guillaume full of joy and kindness, may God keep you close to him." 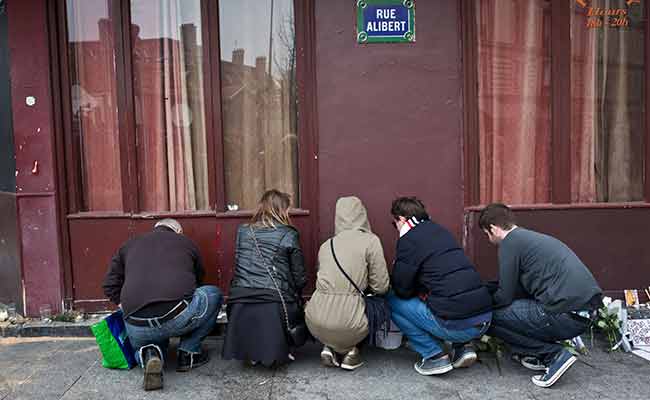 People gather in front of the Petit Cambodge restaurant and the Carillon restaurant where 12 people got killed during a terrorist attack. (Virginie Nguyen Hoang - For The Washington Post)

The victims at six attack sites - the Bataclan concert venue, a soccer stadium, and bawdy bars and restaurants in east Paris - included Nohemi Gonzalez, 23, a California State University design student spending her junior year abroad. And Bertrand Navarret, 37, a heavy-metal fan from southern France who was among the first to die as the gunmen fired into the crowd at the concert. And two Tunisian sisters celebrating a friend's birthday on a night out.

Many Parisians - as they did after the attacks in January - vowed to hold firm. But some also questioned the wisdom of France's involvement in the Middle East.

"I'm indignant about the foreign policy of France,"Yannis Hassany, 25, a Parisian student of Syrian and Lebanese descent, said Saturday. He was standing near the bloodstained streets of two of the attack sites, Le Carillon bar and Le Petit Cambodge restaurant. "What we've done the last four years is responsible for what happened here. France is implicated. France never should have gotten involved in Syria."

As of late Saturday, at least 10 suspects were arrested in Belgium. During the attacks Friday, six suspects blew themselves up and a seventh was killed by police. The Islamic State, however, claimed that eight men were directly involved in the attacks.

The siege began at 9:20 p.m. local time Friday, and lasted until police stormed the concert hall at 12:20 a.m. The three teams of suicide bombers had spread out across Paris, with two of the groups racing through the city's streets in a black SEAT Leon and a black Volkswagen Polo. They deployed "war-type weapons": Kalashnikov rifles and explosive belts with identical triggers, said Francois Molins, a prosecutor in Paris.

The style of weapons indicates that the assailants "wanted to claim as many victims as possible," he said. 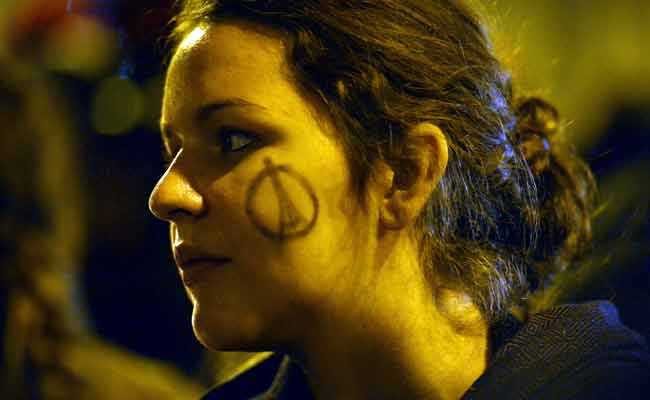 Louis H., a 26-year-old employee at the Bataclan who asked that only his first name and initial be used, said he was attending the concert with his mother. They were sitting in the center of the hall when they heard loud sounds he later realized were gunshots, followed by shouting and a rush of confusion. The band stopped playing and the lights went on.

He said he and his mother pretended to be dead, lying on the floor for 10 minutes as they heard more shots and yelling. The gunmen, he said, walked close to him but kept going. Later, someone shouted, "They're gone," and he and his mother ran for the exit, passing dead bodies and wounded concert-goers.

He said he kept his eyes diverted from the shooters. "If I looked at them, I would die," he said.
In an echo of the January attacks, officials said at least one suspect was a 29-year-old who was eight days shy of his birthday and whom two French media outlets identified as Ismael Omar Mostefai. He was the father of a 5-year-old girl and was repeatedly arrested in connection with petty crimes between 2010 and 2015. Le Monde newspaper reported Saturday that Mostefai was suspected of having traveled to Syria for a few months in the winter of 2013 and 2014.

Officials, however, declined to release the names of any suspects. At one of the attack sites - the stadium where Hollande was attending a soccer match between France and Germany - officials discovered the passport of a man born in Idlib, Syria, who had entered Europe via Greece as a refugee.

Officials have not conclusively connected the document to one of the two men who blew themselves up at the stadium. But the possible link was enough to ignite fresh calls by some in Europe to end the unprecedented flow of refugees pouring into Europe from war zones in the Middle East.

"The attacks mean the necessity of an even deeper revision of the European policy toward the migrant crisis," Konrad Szymanski, Poland's new European affairs minister, told a local radio station.

French officials recovered fingerprints from at least four of the men, with French, German and other European law enforcement agencies seeking possible matches.

As if in response to the tough declarations from Hollande on Saturday, the Islamic State moments later asserted responsibility for the attacks.

The claim - issued on its internal social media site - said the terrorist group had "precisely chosen targets in the center of the capital of France" and specifically mentioned Hollande's appearance at the soccer match.

"Let France and all nations following its path know that they will continue to be at the top of the target list of the Islamic State," it said.