Killers 'Did Not Give Anybody a Chance' 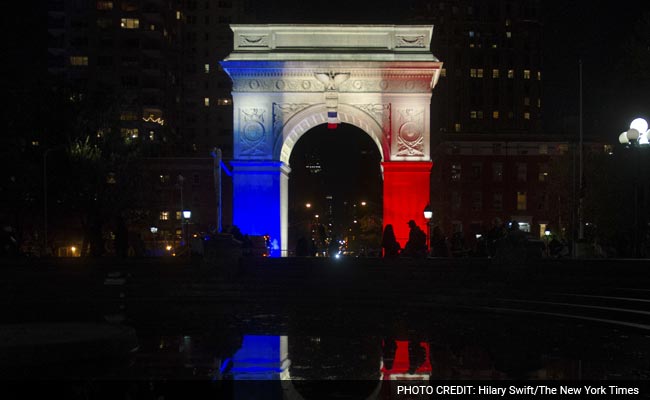 Mai Hua, a fashion blogger and video director who was dining a few blocks away, figured the explosions she heard must be just another burst of gang violence.

Erin Allweiss, a publicist from New York who was eating at a restaurant in the same district, hoped the noise came from fireworks.

One by one on Friday evening, all the ordinary reflexes, expectations and hopes of urban life fell away as tens of thousands of Parisians and visitors to their city confronted what President Francois Hollande would describe as a display of "absolute barbarity."

The dull thuds and sharp cracks that so many thought, or at least hoped, were just the background noises of a night on the town in one of the world's great, vibrant cities turned out to be the ghastly soundtrack of the worst terrorist assault on the French capital, even bloodier than the January attacks on a satirical newspaper and a kosher supermarket. A mourners places a candle at a memorial on the Rue de Charonne, near one of the sites where people died in a string of terror attacks across Paris

Little seemed to tie together the attacks across at least six sites, except that all 129 victims had been out having fun. But that was very much the point for the Islamic State militant group, which later took responsibility for the carnage and said it had struck France's symbols of "perversity."

There were other common elements as well - synchronized attacks, targeting random victims, by well-equipped and apparently trained militants, whom Francois Molins, the Paris prosecutor, described as working in three coordinated squads.

The attacks began at 9:20 p.m. on a chilly Friday the 13th outside the stadium, in the suburb of St.-Denis, where France was playing Germany. President Francois Hollande was among those in attendance.

"We heard something that sounded like a detonating bomb as well as shooting," said Agnes Dupont, who was at the match with her husband and two young children, their faces brightly painted with the blue, white and red stripes of the French flag.

Others said they thought youngsters outside the stadium were setting off firecrackers. Another blast followed 10 minutes later. The teams kept playing.

The prosecutor, Molins, later said two of the attackers had blown themselves up near gates to the stadium, which they apparently had tried to enter. A third blew himself up much at 9:53 p.m. near a McDonald's, killing at least one other person.

Across the city, five minutes after the first suicide bomber blew himself up outside the stadium, Betty Alves, a 39-year-old Parisian, was ordering Chinese food with a friend at a restaurant in the once working-class and now fashionable 10th Arrondissement. Gunshots rang out.

"It was terrifying," she recalled later. "We saw everyone run down the street. We jumped on the floor and I hid under the table."

The restaurant closed its metal shutters and everyone hid inside.

When they reopened the shutters, Alves said she saw one young woman dead on the street and another man seriously injured. Her car, a Smart, parked on the corner of Rue Faubourg-du-Temple and Rue de la Fontaine-au-Roi, was riddled with bullet holes.

In that time, 15 diners were killed at the nearby Le Petit Cambodge, an Asian restaurant near a canal that runs through the 10th Arrondissement, and at a restaurant across the street, Le Carillon.

Gunmen, according to witnesses, sprayed the establishments with bullets from a black vehicle and then raced away, shooting at a Laundromat and other random targets as they went.

At the time, Hua, 38, the fashion blogger, was eating nearby with three friends on a terrace at Madame Shawn, a Thai restaurant in the area, when she and her friends heard a series of loud bangs. She said they initially thought the noise was related to gang clashes that sometimes blighted the area.

"It took us a while to register what had happened," she said. "I looked at my iPhone and I had many worried calls. This is one of the most densely populated areas in Paris. There is no place that is more full on a Friday night. This is a place where young people hang out. It was a hit at the soul of Paris."

By 9:32 p.m., the same squad of terrorists in the same vehicle, according to the prosecutor, had found their next target: the Cafe Bonne Biere, a bar in the adjacent 11th Arrondissement. At least five people were killed there.

A few blocks away, Allweiss, the New York publicist, was with friends at the restaurant Auberge des Pyr&#233;n&#233;es C&#233;vennes when the shots began.

"They were so loud," Allweiss said by telephone. "It felt like they were on top of us. People screamed to lock the door. We hoped they were fireworks. But we knew they weren't fireworks."

The attacks then came in quick succession: at 9:36, then 9:40, just blocks apart. Gunmen raked at least four restaurants and bars with gunfire in a fast-gentrifying area of Paris. At least 19 people died at La Belle Equipe, a cafe with an outdoor seating area that was hit by sustained gunfire.

"It was not just one or two bullets. The shooting lasted five minutes. They did not give anybody a chance," Antoine Barnier, a witness, told BFM, a French television news channel.

Nearby, in the Comptoir Voltaire restaurant on Boulevard Voltaire in the 11th Arrondissement, another suicide bomber detonated a vest identical to the first two, the prosecutor said. One person in the restaurant was seriously wounded; others were only lightly wounded.

The violence reached its climax less than a mile away at the Bataclan, a concert hall, which three gunmen - apparently a third team of terrorists arriving in a black car - entered at 9:40 p.m. There, they took more than 1,000 music fans hostage and shot them indiscriminately before the police regained control in a hail of gunfire and explosions shortly after midnight.

The attackers, according to witnesses, denounced Hollande and his support for the U.S.-led military campaign against the Islamic State. The Paris prosecutor said they had cited Syria and Iraq during brief encounters with the authorities.

"This was not a targeted attack but a mass execution," Granier, the wine expert, said of his evening at the Paris concert hall that on Friday became a slaughterhouse in which 89 of his fellow rock fans were killed.
He had gone there to see the Eagles of Death Metal, a hard-driving band from California. He went alone because his girlfriend, who dislikes noisy music, spurned his offer of a date.

The band had played around five songs and the audience was warmed up when a series of loud bangs echoed around the 19th-century concert hall on Boulevard Voltaire in central Paris.

"I thought this was just part of the show," Granier, 24, recalled. "There was so much noise and shouting you could not tell what was going on at first."

After seeing fellow concertgoers fall to the ground splattered in blood, Granier took refuge in a room backstage as three heavily armed men took control; he stayed there for nearly three hours until French antiterrorism forces stormed the ornate, Chinoiserie-style building about 20 minutes after midnight.

While Granier hid in a backstage room, Ginnie Watson, a 35-year-old French-British actress and singer who had been watching the concert from the balcony, headed with her friends for a security exit she had noticed earlier on her way to the washroom. Like many others in the hall, she had mistaken the initial gunfire as part of the show.

She and her friends pushed open the security exit door and, after pausing to make sure the coast was clear, rushed down a staircase leading to the street.

After at least five attacks over 20 minutes, word had quickly spread, friend to friend by text, cellphone to cellphone among loved ones.

Antoine Griezmann, a player for the French national team who heard the first explosion that shook the stadium rafters, learned about the attack at the Bataclan.

His sister had gone there to hear the Eagles of Death Metal. He frantically tried to find out if she was safe, finally discovering that she had escaped unscathed.

"May God take care of my sister and the rest of France," the soccer player wrote on Twitter.
© 2015, The New York Times News Service

IMF Bailout Conditions "Beyond Imagination", Will Have To Agree: Pak PM