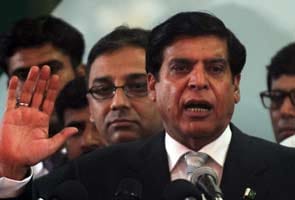 A five-judge bench headed by Justice Anwar Zaheer Jamali retracted the contempt notice after Law Minister Farooq Naek presented a receipt that showed the Swiss authorities had received the government's recent letter for the revival of the graft cases on November 9.

During the hearing, Naek requested the court to dismiss the case as the government's letter, written by the Attorney General, had been sent to the Swiss Attorney General in Geneva.

Justice Jamali acknowledged that the government had complied with the court's directives of writing to Swiss authorities for reopening the graft cases.

Talking to journalists after the hearing, Naek said the court's decision was a victory for justice and democracy.

The government, he said, had implemented every directive of the supreme court.

The government's letter to the Swiss authorities makes it clear that the graft cases can be revived with the condition that the President enjoys immunity under the Constitution, and Pakistani and international laws.

The Supreme Court and the government recently came to an agreement on the contents of the letter to be sent to the Swiss authorities after months of sparring.

The government had initially refused to make any move to revive the cases.

Zardari and his slain wife, former premier Benazir Bhutto, were accused of laundering millions of dollars through Swiss banks.

The ruling Pakistan People's Party has said that the charges against them were never proved.

The Supreme Court has been pressuring the government to revive the cases against the President since December 2009, when it struck down a graft amnesty issued by former military ruler Pervez Musharraf that benefited Zardari and over 8,000 others.

The government refused to act for months before Prime Minister Raja Pervez Ashraf agreed to implement the Supreme court's orders after he was charged with contempt.

Ashraf's predecessor, Yousuf Raza Gilani, was convicted of contempt and disqualified in June for refusing to reopen the cases against Zardari.