Emirates Airlines confirmed the attack and said that the passenger became angry after attempting to check in for her flight late and with an expired passport. 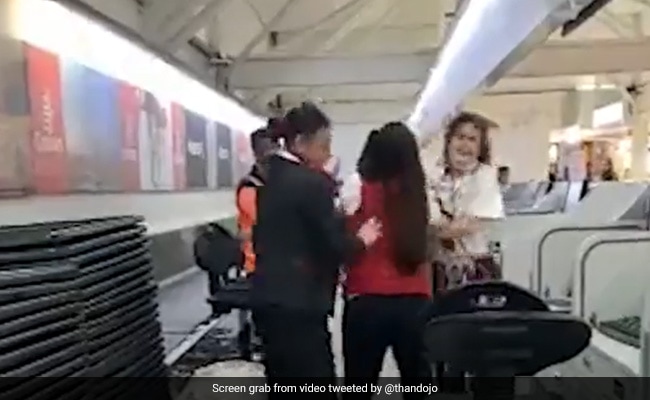 The incident took place on November 1.

A video of a woman attacking Emirates airline check-in staff at an airport in Mexico is going viral on social media. The clip, captured on November 1, showed the woman yelling, throwing a suitcase at fellow passengers and vandalising a check-in desk while staff called for security.

The short clip was shared on Twitter with the caption, "Moment woman throws punches at Emirates airline employee and hurls objects at bystanders after missing her flight at #MexicoCity airport".

According to The Independent, the woman even climbed over the counter before throwing equipment onto the floor and standing on top of desks, shouting "help" as security staff asked her to step down.

The woman reportedly started throwing punches after she was late for her flight on Tuesday. It's unclear where she missed her flight too. As per the outlet, Emirates Airlines confirmed the attack and said that the passenger became angry after attempting to check in for her flight late and with an expired passport.

Meanwhile, in recent months, there has been a spike in disruptive passenger behaviour worldwide. Back in October, a video of a US woman screaming at cabin crew and throwing a full water bottle at fellow passengers had gone viral on social media.

The same month, a Turkish Airlines flight to the Indonesian capital Jakarta was forced to make an emergency landing after an intoxicated passenger got into a fight with flight attendants. A video of the incident showed a man throwing punches at a crew member holding plastic handcuffs. The passenger was reportedly intoxicated and even bit a steward's finger.