The fish had at least half a dozen chunks of meat missing from its side and belly. 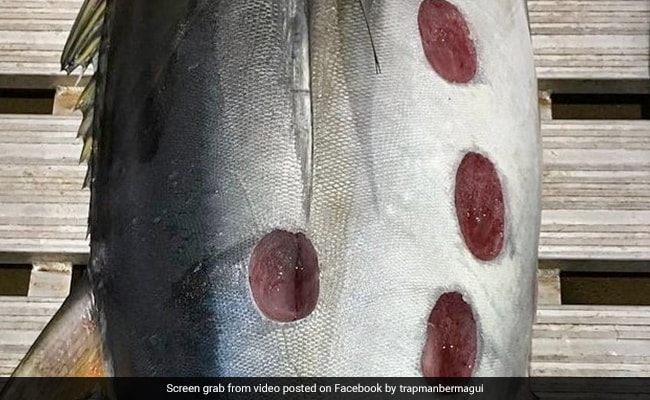 Internet called the image straight out of a "horror movie".

A viral image showing strange circular bite marks on a Tuna fish's body is giving people the creeps on social media. A professional angler, known as Trampman Bermagui, posted a picture of the marine creature on Facebook on October 29 with the caption, "Serious cookie-cutter bites on this tuna".

The image showed the fish with strange wounds that were too far apart to be a single bite mark, too round to be claw marks and too similar to be random. The fish had at least half a dozen chunks of meat missing from its side and belly.

Since being shared, the picture accumulated more than 1,000 likes and over 150 comments. While some internet users said that the image is straight out of a "horror movie", others wrote, "as if there weren't enough things to be scared of in the ocean".

"An awesome horror movie," wrote one user. "Never seen one with this many bites," said another. "They aren't bites. They are skin ulcers from bacteria or fun," pointed out third.

However, according to the original poster, it was a cookie-cutter shark, species that nibbles at its prey without killing it. As per Miami Herald, cookie cutters are among the world's "lesser known" sharks and also one of the strongest.

Even though they are just 18 meters long in length, the species are reportedly responsible for three attacks on humans in 2019. Cookie-cutters attach themselves to its prey, stick their teeth out, twist around and cut out the perfectly circular piece of meat.