The photo has touched the hearts of several Twitter users who praised the IAS officer for his gesture. 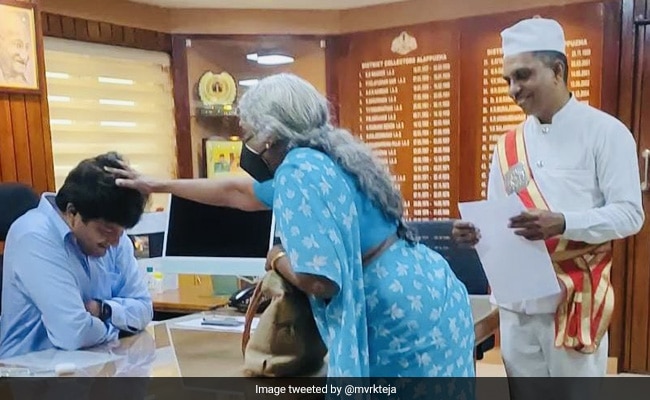 Indian Administrative Service (IAS) officer Krishna Teja has posted a sweet photo on Twitter that is winning hearts of social media users. In the photo, Mr Teja is seen receiving blessing from a woman who visited his office. The IAS officer is sitting on his chair smiling, with his head bowed in respect. Since being posted on Monday morning, the photo has amassed more than 8,700 likes and close to 250 retweets. Several Twitter users have liked Mr Teja's humility and congratulated him.

A 2015-batch IAS officer, Mr Teja is the District Collector of Alappuzha in Kerala.

What else u need 😊😊 #IAmForAlleppeypic.twitter.com/c0rjYUoHAk

The photo has been taken in his office, where a woman in blue sari is giving blessing to the IAS officer by putting her hand on his head. Mr Teja is bowed in respect and one of the staff members is seen smiling at the gesture.

The IAS officer has captioned the post as, "What else u need," and added the hashtag #IAmForAlleppey.

His photo has touched the hearts of several Twitter users who praised the IAS officer for his gesture.

"A rare scene! A few are there like you who get such warm blessings from the core of the hearts of the citizens! Keep the good man within you guiding, and motivating you in your life! May God bless you! The pic says what words can't!" said one Twitter user.

"Its ur Treasurer photo sir and Great feeling sir...Happy to see this sir," commented another.

Some users wanted to know is the woman blessing the IAS officer is Finance Minister Nirmala Sitharaman, but others quickly rubbished the claims.