Washington is seeking the "complete, verifiable and irreversible denuclearisation" of the North and stresses that verification will be key. 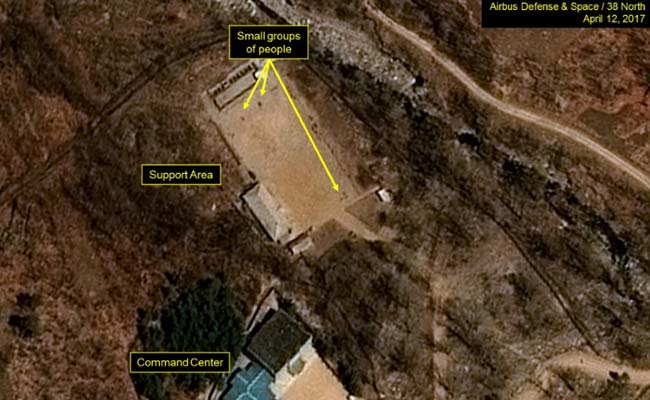 Sceptics warn that Pyongyang has yet to make any public commitment to give up its arsenal. (File)

Seoul, South Korea: North Korea will destroy its nuclear test site later this month, ahead of a summit with the United States, it said Saturday, pledging to blow up its tunnels in front of invited foreign media.

US President Donald Trump praised the North's decision to dismantle the Punggye-ri test site in a ceremony scheduled between May 23-25, the latest step in leader Kim Jong Un's charm offensive.

"Thank you, a very smart and gracious gesture!" Trump tweeted.

Dialogue brokered by Seoul has seen US-North Korea relations go from trading personal insults and threats of war last year to a summit between Kim and Trump due in Singapore on June 12.

But sceptics warn that Pyongyang has yet to make any public commitment to give up its arsenal, which includes missiles capable of reaching the United States.

Washington is seeking the "complete, verifiable and irreversible denuclearisation" of the North and stresses that verification will be key.

Punggye-ri, in the northeast of the country, has hosted all six of the North's nuclear tests, the latest and by far the most powerful in September last year, which Pyongyang said was an H-bomb.

Kim has declared the development of the North's nuclear force complete and that it had no further need for the site.

The latest measures will see the tunnels of the test site blown up and their entrances completely blocked, Pyongyang's foreign ministry said, according to the official KCNA news agency.

All observation facilities and research institutes would be removed, along with guards, it said, "and the surrounding area of the test ground be completely closed".

Reporters from China, Russia, the United States, Britain and South Korea would be allowed to cover the event on site to show it "in a transparent manner".

Limits on foreign journalists were due to space constraints, it said, as the site was in an "uninhabited deep mountain area".

Analysts said the move was positive but limited in its scope.

It was "not bad, but a cost-free signal", tweeted MIT political science professor Vipin Narang.

Given the stage it had already reached, Pyongyang "may feel like they don't need to test anything for a while", he said.

Jeffrey Lewis, of the Middlebury Institute for International Studies, expected that the North "will sanitise the site before letting anyone see it".

Saturday's announcement is the latest move in a rapid sequence of events on the Korean peninsula triggered by the Winter Olympics in the South.

Tensions had been mounting for years as Pyongyang's nuclear and ballistic missile programmes saw it subjected to multiple rounds of increasingly strict sanctions by the UN Security Council, the US, EU, South Korea and others, and Trump last year threatened the North with "fire and fury".

But since the Pyeongchang Games, Pyongyang and Washington have agreed to the unprecedented Singapore meeting, and Kim has twice visited China to meet President Xi Jinping, after not paying respects in the six years since he inherited power from his father.

The head of the UN's World Food Programme said Saturday it appeared North Korea was "turning a new page in history", following a four-day visit to the country.

David Beasley said he had enjoyed unprecedented access to the secretive state, telling BBC radio that North Korea's leaders had a "sense of optimism".

Kim and South Korean President Moon Jae-in last month affirmed their commitment to the goal of "realising, through complete denuclearisation, a nuclear-free Korean Peninsula" at a summit in the Demilitarized Zone that divides their countries.

But the phrase is a diplomatic euphemism open to interpretation on both sides.

Pyongyang has long wanted to see an end to the US military presence in and nuclear umbrella over the South, but it invaded its neighbour in 1950 and is the only one of the two Koreas to possess nuclear weapons.

This week the North released three Korean-Americans it had detained into the care of US Secretary of State Mike Pompeo, who was making his second trip to Pyongyang in two months.

Trump also withdrew the United States from a nuclear pact with Iran, raising questions over whether Pyongyang would trust Washington's promises.

Pompeo Friday promised the US would work to rebuild North Korea's sanctions-hit economy if it agreed to surrender its nuclear arsenal.

(Except for the headline, this story has not been edited by NDTV staff and is published from a syndicated feed.)
Comments
North Korea denuclearisationTrump Kim Jong un meeting