New York To London In Just 3.5 hours? It's In The Works

United Airlines will purchase Sonic Boom's "Overture" aircraft with an aim to start passenger travel in 2029. 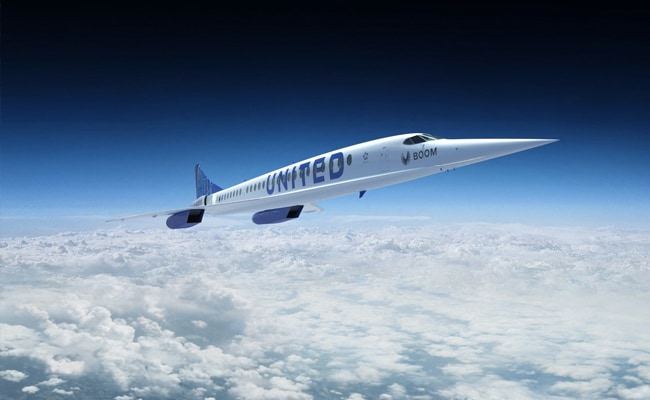 Sonic Boom's plane is capable of flying at twice the speed of leading aircraft now on the market.

United Airlines announced plans Thursday to buy 15 planes from airline startup Boom Supersonic in a move that could revive the high-speed form of air travel after the Concorde was wound down in 2003.

Under the commercial agreement, United would purchase Boom's "Overture" aircraft once the planes meet "United's demanding safety, operating and sustainability requirements" with an aim to start passenger travel in 2029, the companies said in a joint press release.

The announcement represents a potential comeback to a once heavily-touted method of travel, although some analysts expressed skepticism, particularly over the relatively speedy timeframe.

The agreement covers 15 planes and includes an option for United to obtain another 35 aircraft. The companies did not disclose financial terms.

"It's an interesting idea, but there are a lot of questions," said Michel Merluzeau, an expert at consultancy AIR, who estimates that developing a new commercial jet that passes muster with regulators could cost $10 to $15 billion.

"We need to be realistic about this," added Merluzeau, who sees 2035 or 2040 as a more likely target date for commercial service.

Merluzeau said it also was not clear whether United had agreed to any payments or if the announcement represented an intention to purchase.

Boom's plane is capable of flying at twice the speed of leading aircraft now on the market, with the potential to fly from Newark to London in three and a half hours and San Francisco to Tokyo in six hours, the companies said.

The jets will also be "net-zero" in carbon use because they will employ renewable fuel.

Commercial supersonic jet travel was introduced in the 1970s with the Concorde, but the jets were retired in 2003 due in part to the high cost of meeting environmental restrictions on sonic booms.

The aircraft could fly at over twice the speed of sound, creating its famous "sonic boom" when it burst through the sound barrier.

Only the wealthiest passengers were able to afford the exorbitant ticket prices for the 100-144 seats on the aircraft, which was only ever used by Air France and British Airways.

However, the technology is getting another look today as companies in the United States and abroad develop planes with lighter and more efficient composite materials and new engine designs, according to a fact sheet from the Federal Aviation Administration.

"Our mission has always been about connecting people and now working with Boom, we'll be able to do that on an even greater scale," said United Chief Executive Scott Kirby.

Founded in 2014, Denver-based Boom Supersonic said it is also working with the United States Air Force on a military version of the Overture.

The company has thus far raised $270 million from investors, a spokeswoman for Boom said. Boom Supersonic's supporters include venture capital investors such as Bessemer Venture Partners and American Express Ventures, a unit of the credit card company.

Boom's chief executive and co-founder, Blake Scholl, a former Amazon staffer, has touted the venture as a way to meet consumer interest in an increasingly inter-connected world.

"The story of Concorde is the story of a journey started but not completed -- and we want to pick up on it," Scholl said in July 2018 at an event held in parallel to the Farnborough Airshow.

But Scholl has acknowledged that the price could be beyond the budget of some consumers.

"What we've been able to do thanks to advances in aerodynamics and materials and engines is offer a high speed flight for the same price you pay in business class today," Scholl told AFP in a 2018 interview, adding that a roundtrip ticket across the Atlantic could cost $5,000.

Jon Ostrower, editor of the aviation publication the Air Current, said on Twitter that United's order marked a shift in a long-term industry trend.

"The last time United ordered supersonic aircraft, humans had yet to walk on the Moon," Ostrower said. "More than a half century later, United is again focusing on speed, bucking the most consistent airline trend over the past 50 years: a desire to fly cheaper, not faster."

"France Would Have Shut It Down": Co-Owner On Faulty Nuclear Plant In China