The event kicks off "Spit Spreads Death," an exhibition about Philadelphia's health disaster and the worldwide influenza pandemic nearly a hundred years ago. 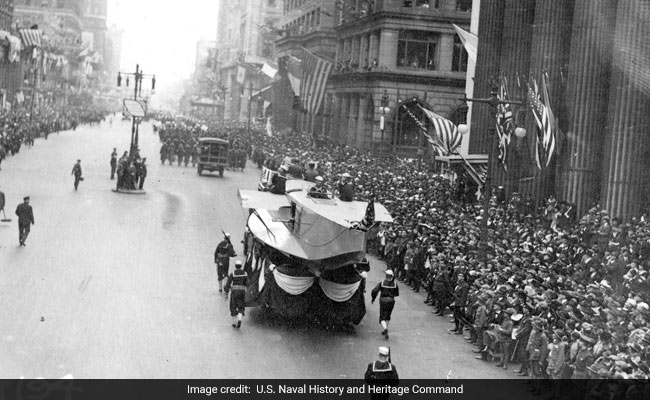 On Sept. 28, 1918, hundreds of thousands of people gathered in Philadelphia to watch a patriotic spectacle. But the Liberty Loan Parade, which was to promote government bonds that would help pay for the Allied cause in World War I, had an unwelcome guest: influenza.

Within 72 hours, area hospitals overflowed with flu patients. Within weeks, nearly 13,000 were dead. Today, historians blame the packed parade for the spread of the devastating influenza epidemic in the city. (Worldwide, about 500 million people were infected and at least 50 million died in the pandemic, according to the Centers for Disease Control and Prevention.)

Echoes of that deadly event will sound on Saturday, when a performance art parade takes to the streets of Philadelphia.

The parade kicks off "Spit Spreads Death," a new exhibition and project by the Mütter Museum of the College of Physicians of Philadelphia opening Oct. 17. It was designed by Blast Theory, a British art collective that specializes in immersive, interactive media installations.

The public will be a key part of the parade. People can sign up as patient representatives, marching in honor of individual flu victims who died in Philadelphia on the pandemic's deadliest day. During the world premiere of choral music composed by Pulitzer Prize winner David Lang and sung by the Crossing, a Grammy-winning Philadelphia choir, the names of all 751 of those victims will be called out.

As the music plays from participants' cellphones, each patient representative will pass alone between two illuminated, 20-foot-long floats in a moment of commemoration.

The grim spectacle has a purpose: to reflect on historic losses and an all-too-modern health crisis. According to the CDC, 49 million people in the United States were infected with influenza in 2018 alone. About 79,000 of those people died. The CDC estimates that 80 percent of flu-associated deaths in children occurred among children who had not been vaccinated.

At the end of the parade route at Dilworth Park there will be a free event featuring public health information, food and comment from the artists. Free flu shots also will be available.

The parade leaves from Marconi Plaza at 6 p.m. Want to march in honor of a flu victim? Visit Spitspreadsdeath.com to choose someone to represent. You can pick by name, age, neighborhood or occupation, or let the website choose on your behalf. Participants can also choose at parade time, although names may be limited, or just watch from the sidelines.

(Except for the headline, this story has not been edited by NDTV staff and is published from a syndicated feed.)
Comments
influenzaPhiladelphiaLiberty Loan Parade

"Plague From China" Should Have Never Happened: Donald Trump On COVID-19