This is Oymyakon, a settlement of some 500 people in Russia's Yakutia region, that has earned the reputation as the coldest permanently occupied human settlement in the world. 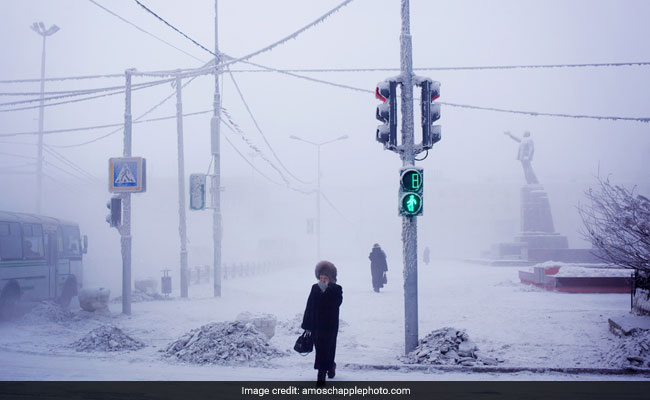 The town wears its reputation on its sleeve: "The pole of the cold," one sign says.

In this remote outpost in Siberia, the cold is no small affair.

Eyelashes freeze, frostbite is a constant danger and cars are usually kept running even when not being used, lest their batteries die in temperatures that average minus-58 degrees Fahrenheit in the winter, according to news reports.

This is Oymyakon, a settlement of some 500 people in Russia's Yakutia region, that has earned the reputation as the coldest permanently occupied human settlement in the world.

It is not a reputation that has been won easily. Earlier this week, a cold snap sent temperatures plunging toward record lows.

The town's official measurement recorded the temperature at minus-74 Fahrenheit this week, though a new digital thermometer installed in town for all to see, part of the town's reputation for frigid temperatures, broke as it registered minus-80 degrees on Sunday. According to the Siberian Times, some residents' own measurements had shown the temperature below minus-88 degrees, approaching a former record from the 1930s.

The village recorded an all-time low of minus-98 degrees Fahrenheit in 2013.

Though schools in the area remain open as temperatures dip into the minus-40s, they were closed on Tuesday, the Associated Press reported.

Dark 21 hours a day in the winter, the town has been an object of international curiosity as its reputation for fearsome cold and the resilient residents who withstand it year after year, has grown.

Amos Chapple, a photojournalist from New Zealand, traveled to the region in 2015 to capture the subzero way of life. The village is remote, located closer to the Arctic Circle than to the nearest major city, some 500 miles away, and Chapple described an arduous trip to get there to The Washington Post. After a seven-hour flight from Moscow, some 3,300 miles away, he took a van to a nearby gas station and then hitched a ride to the village after two days waiting in a shack and living off reindeer soup.

"After the first couple of days I was physically wrecked just from strolling around the streets for a few hours," he said.

The harsh cold climate permeates nearly every aspect of existence for the people who live in the area. The winter diet is mostly meat-based, sometimes eaten raw or frozen, due to the inability to grow crops in the frigid temperatures. Some regional specialties include: stroganina, which is raw, long-sliced frozen fish; reindeer meat; raw, frozen horse liver, and ice cubes of horse blood with macaroni, according to news reports.

"Yakutians love the cold food, the frozen raw Arctic fish, white salmon, whitefish, frozen raw horse liver, but they are considered to be delicacies," local Bolot Bochkarev told the Weather Channel. "In daily life, we like eating the soup with meat. The meat is a must. It helps our health much."

Video taken during the cold snap showed a market, open for business on the snowy tundra, frozen fish standing rigidly upright in buckets and boxes, no refrigeration needed. Customers in heavy winter clothing walked by, one with a child in tow. The narrator said it was minus-56 degrees.

"Here is the treasure," the video's narrator said of the whitefish used to make stroganina. He admitted he was getting a bit cold shooting the video.

"While filming the trading rows my hands froze to wild pain. And sellers stand here all day long. How do they warm themselves?" he said, according to the Siberian Times.

The village was once a stopover in the 1920s and '30s for reindeer herders who would water their flocks at a thermal spring that didn't freeze. Bathrooms are mostly outhouses; the ground is too frozen for pipes. According to the Weather Channel, the ground has to be warmed with a bonfire to break into, such as for digging a grave. 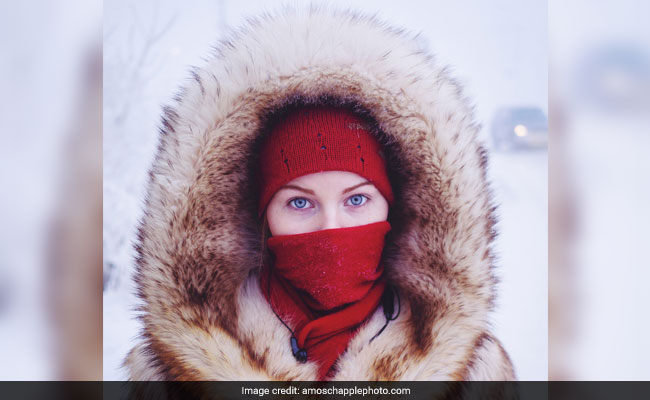 The harsh cold climate permeates nearly every aspect of existence for the people who live in the area.

According to the Siberian Times, two men died after their car stalled and they had set out on foot during the cold streak. The group, a horse breeder and four friends, had gone to check on some animals near the river.

The press office for the region's governor said that all households and businesses have central heating and backup power generators, according to the Associated Press.

After his trip, Chapple said it was not easy doing man-on-the-street interviews in a place that was so cold, as people outside rushed quickly from one warm place to another. Alcoholism is believed to be an issue in the area, Chapple told reporters. Depending on how cold the weather dips, people often trade off 20-minute shifts when doing work outside, according to news reports.

Chapple said saliva would freeze into "needles that would prick my lips." Shooting was no easier - his camera would constantly get too cold to shoot, he said. The steam escaping his mouth would "swirl around like cigar smoke" he told Wired, so he'd have to hold his breath so it didn't cloud the frame. He told Wired that he shot one photo without his gloves only to find his thumb partially frozen.

The town wears its reputation on its sleeve: "The pole of the cold," one sign says.

(Except for the headline, this story has not been edited by NDTV staff and is published from a syndicated feed.)
Comments
SiberiaYakutia Coldest Region