Hundreds March Against Donald Trump Ahead Of New York Visit 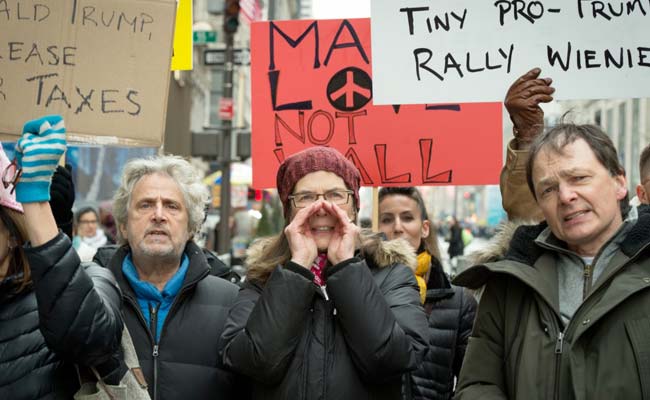 New York: US President Donald Trump on Thursday made the first return to his hometown of New York since taking office, for a meeting with Australian Prime Minister Malcolm Turnbull.

Hundreds of protesters marched in the city against the president -- a smaller show of opposition than the massive demonstration that had been urged.

"Hey, hey! Ho, ho! Donald Trump has got to go!" members of the group shouted, as they marched toward a decommissioned aircraft carrier serving as a museum where Trump was to dine with Turnbull.

The Republican's policies are heavily disliked in the largely Democratic city, where 80 percent of the electorate voted for his opponent Hillary Clinton last November.

Trump arrived in Manhattan later than scheduled, after taking time in Washington to celebrate a long-sought Republican victory in Congress, which voted to  repeal and replace Barack Obama's 2010 signature health law known as "Obamacare."

Although the bill has yet to pass the Senate -- where it faces an uphill battle -- the triumph represented a significant win for Trump after a number of setbacks.

The real estate tycoon and former reality TV star was to spend only a few hours in the city where he lived before his election -- and where his wife Melania and their 11-year-old son still reside.

Trump was to leave later Thursday for a weekend at a golf club he owns in Bedminster, New Jersey, some 50 miles (80 kilometers) outside New York City.

The metropolis has seen frequent anti-Trump demonstrations in past weeks and months, some gathering thousands of people.

Even though the turnout Thursday was smaller, demonstrators voiced their criticism of Trump's policies, and the man himself.

"I'm just here to protest everything Trump," real estate broker Nina Horowitz said. "It just gets worse and worse and he's just not president material by any stretch of the imagination."

"He's an anti-intellectual who's not qualified for the job and I believe he contradicts what America is supposed to be about," said one of the march organizers, Flav Maximus, 39.

Trump's moves to restrict immigration, roll back federal protections for transgender students and assault Obamacare are all widely unwelcome in America's most populous city, and one of its most liberal.

(Except for the headline, this story has not been edited by NDTV staff and is published from a syndicated feed.)
Comments
Donald TrumpAustralian Prime Minister Malcolm TurnbullHillary Clinton