From Landslide For Theresa May To Upset Defeat: Scenarios For UK Election

The UK election votes will decide whether the Conservative Party Leader, Theresa May or her Labour Party rival Jeremy Corbyn takes control of Britain's exit from the European Union - a two-year negotiation which will plot a new course for the $2.6 trillion economy. 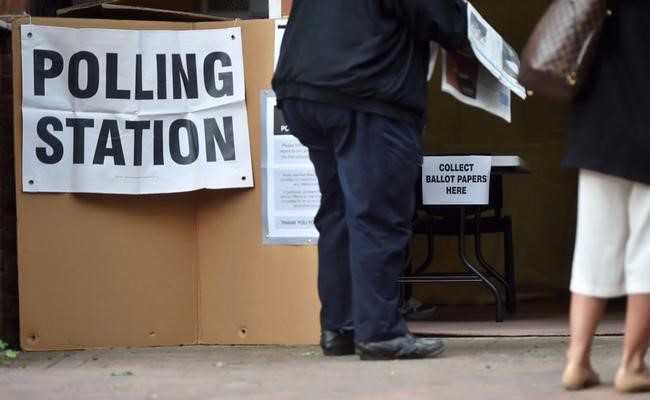 Voters arrive at a garage which is being used as a polling station in Croydon on UK general election day.

London: British Prime Minister Theresa May's narrowing lead in opinion polls ahead of the June 8 election has weakened sterling and raised questions over whether she will win the landslide predicted just over a month ago.

The vote will decide whether May or her Labour Party rival Jeremy Corbyn takes control of Britain's exit from the European Union - a two-year negotiation which will plot a new course for the $2.6 trillion economy.

While she is still expected to win, with a lead of between one percentage point and 12 points in polls released over recent days, financial markets are now digesting a bigger range of outcomes than they previously had considered.

Sterling rallied in April when May called the vote as investors bet her then-large poll lead would translate into a big majority, reducing uncertainty over whether she would have the mandate required to negotiate on Britain's behalf and then drive the deal through parliament.

The snap election pushes back the date of the next planned national election from 2020 - just after Britain is due to have quit the EU - to 2022, giving May more time to put the exit deal in place and potentially reducing political risk over how the deal is implemented.

Some also take the view that a big majority would allow her to make compromises with Brussels, in contrast to a hardline approach to date that has prioritised issues like immigration and trade over access to Europe's lucrative single market.

That all helped push sterling to an eight-month high of $1.3048 on May 18, since when it has weakened.

U.S. bank Citi said a majority of more than 100 seats would lower the risk of a chaotic EU exit, but also reduce the chance that Britain could remain a member of the EU single market.

"Ultimately, with a big majority for the Conservatives confirming a 'hard-but-smooth' Brexit base case, we think that abating uncertainty risks could see GBP/USD head towards 1.34 in the near term," Citi strategists said in a note last month.

MAY WINS WITH ENHANCED MAJORITY

The Conservatives' lead fell sharply after May announced plans to make elderly voters pay more towards their old-age care, while Corbyn has gained ground thanks to popular policies such as renationalisation and higher taxes for the rich.

Whilst still broadly predicting May will improve on the 12-seat victory her predecessor David Cameron won in 2015, the narrowing polls suggest a majority that might fall well short of a 100-seat or more landslide.

Bank analysts say that would not undermine the central scenarios which have helped the pound in the past month but might struggle to drive it much higher.

"We think our base case (a 70-seat Conservative majority) will result in sterling rallying back to the $1.30-1.3150 range," analysts from Canada's Bank of Montreal said in a note to clients.

"Foremost, this would be the result of market relief that the most bearish result (a Labour victory) didn't come to pass."

MAY WINS BUT NO OVERALL GAINS: 12-SEAT MAJORITY OR LESS

If May does not handsomely beat the 12-seat majority Cameron won in 2015, her electoral gamble will have failed, her ability to drive Brexit reform through parliament will be diminished and she will go into talks later this month looking weaker.

The converse view is that with less room for manoeuvre domestically, she will be able to reject compromises proposed by Brussels and drive a harder bargain, knowing that EU negotiators will not want May to execute her threat of leaving without a deal.

For investors the over-riding factor is likely to be greater uncertainty about whether there will be a deal on Brexit and what it will look like.

Citi said anything less than a 40-seat majority could increase political risks and uncertainty for the Brexit process, pushing sterling lower.

"May's potential dependence on minorities such as hard Brexiteers or hard Remainers would raise the risk of 'chaotic Brexit', but also the chance of a much softer Brexit than she currently aims for," analysts from the U.S. bank said.

The near- to medium-term reaction would likely be a fall in sterling to $1.20, but with the potential for it to rise as high as $1.50 if the political situation evolved in a way that forced May to soften her demands on Brexit, they added.

If neither main party wins a clear majority, markets will have to deal with considerable uncertainty over who will form the next government and what compromises the eventual prime minister will have to make to get the support of other parties.

The Conservatives' positioning on Brexit and, to a lesser extent other domestic issues like austerity, makes it unlikely that it could find a willing coalition partner, making a Labour-led government the most likely outcome from a hung parliament.

JP Morgan said that despite the uncertainty, that outcome could generate a rise for sterling.

"A hung parliament would in more normal circumstances be viewed as quite a negative for sterling," analyst Paul Meggyesi said in a note distributed to media on Tuesday and sent to clients at the end of last week.

"But in the post-referendum world, all political developments need to be viewed through a Brexit prism and an argument can be made that a hung parliament which delivered or held out the prospect of a softer-Brexit coalition of the left-of-centre parties ... might actually be GBP positive."

A clear win for Corbyn, whose less than two-year-old leadership has been marked by poor ratings, divisions among his party and a failed coup attempt, would force many investors to redraw their assumptions on both Brexit and the fiscal outlook.

History shows that sterling tends to weaken on big moves towards Labour in the polls and analysts and London-based traders say they would be braced for an immediate dive in the pound if Corbyn won.

Longer term, however, analysts from a number of banks highlight the potential for both more borrowing to fund economic stimulus and the increased likelihood that Corbyn will negotiate a closer trading relationship with the EU than May would have done.

"At first GBP may suffer as a result from the UK shifting to the left-leaning side of politics and investors' expectations of larger deficit financing," analysts from Japan's Nomura said in a note.

"But because of the higher real yields we would expect and hopes of a soft Brexit - or indeed no Brexit at all - this should eventually provide support to the currency."

(Except for the headline, this story has not been edited by NDTV staff and is published from a syndicated feed.)
Comments
ukelection2017storiesConservative Party Leader Theresa MayLabour Party Leader Jeremy Corbyn